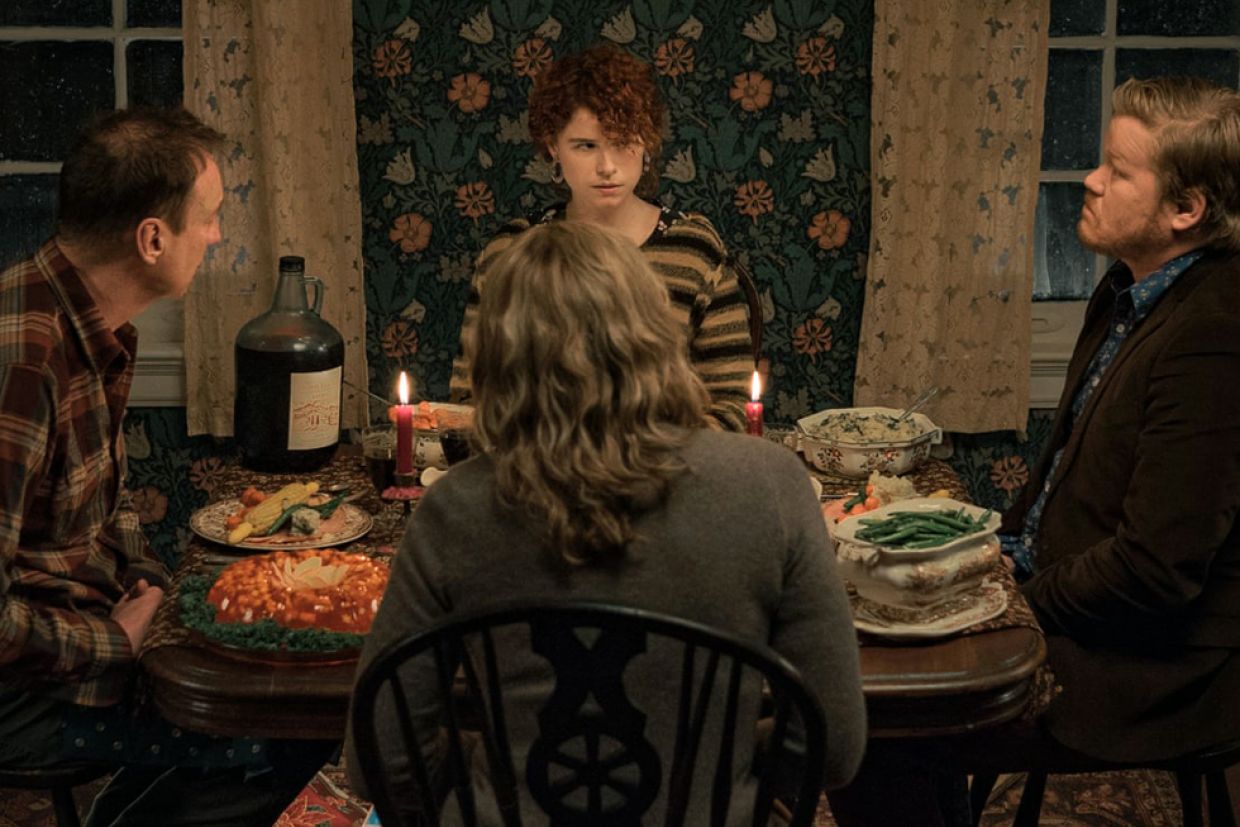 Scene from the movie I’m Thinking of Ending Things

Canada’s Next Big Author is a Queen’s Grad

Iain Reid, Artsci’04, doesn’t spend much time contemplating if he is Canada’s next big author, but evidence points to that direction.

The writer of four books won the RBC Taylor Emerging Writer Award in 2015. His first work of fiction, I’m Thinking of Ending Things, received critical acclaimed in 2016 and made several top 10 books-of-the-year lists. That novel, a dark tale about a woman who takes a road trip with her new boyfriend to meet his parents, has now been adapted into a movie by an Academy Award-winning screenwriter and is debuting on Netflix on Sept. 4. The film rights for his other novel, Foe, have also been sold to a film company. (No word yet if it will be turned into a movie.)

If that is not enough proof of his rising-star status, Vice magazine literally called him “Canada’s next big author.”

It’s hard to get the very humble Reid to brag about himself. He’s heard the hype, but he tends not to get caught up on what others say about him. He is a bit of an introvert, so he is focused on spending time in his Kingston home writing his next novel. (Before COVID-19, he enjoyed taking breaks to play pickup basketball at the ARC on the Queen’s campus.)

He used to be able to work on projects without anyone paying much attention to him. Now his phone has been ringing a lot since the I’m Thinking of Ending Things movie trailer was released on Aug. 6.

“I’m used to flying under the radar,” says Reid. “I really appreciate the interest and people reading and talking about my books. At the same time, it feels weird that people are aware of things I am doing in a way they weren’t before.”

He never dreamed about being a novelist. His dad is an English professor, so he was thinking about an academic career. He studied history and philosophy at Queen’s, but after taking a writing course with Queen’s English Professor Carolyn Smart, he decided to postpone grad school and move to Toronto for a year to give writing a shot.

He started submitting his work to literary magazines and was soon being published in major media outlets such as the National Post and The New Yorker magazine.

“I kept putting off grad school and was having enough success where one year turned into two, and then three,” says Reid. “I never really thought writing could be a full-time job.”

His first two books, One Bird's Choice and The Truth About Luck, were light-hearted personal memoirs. Mr. Reid’s third book, I’m thinking of Ending Things, caught the attention of Charlie Kaufman, the writer of critically acclaimed films such as Being John Malkovich, Adaptation, and Eternal Sunshine of the Spotless Mind (which won the 2005 Academy Award for best original screenplay.)

Kaufman has a reputation as one of the movie industry’s most creative screenwriters who makes thought-provoking movies. Kaufman, who both wrote and directed I’m Thinking of Ending Things, consulted with the author while writing the screenplay. Reid had total trust in the filmmaker and was happy to stand back and see what creative spins the Oscar-winner would put on his book.

“I know he is going to do something that is truthful and honest for the right reasons,” said Reid, who visited the set but wasn’t involved in the day-to-day filming. “He is not going to tweak it to make it more marketable or mainstream. I am a fan of his. So knowing his work, I told him to take (my novel) and do whatever he wants and I will be excited by it.”

Reid is happy with the movie. He recognizes the story structure of his novel, but says a lot of the dialogue was re-written. He says it feels surreal to see his book on screen on a hugely popular platform like Netflix.

“I am excited for people to see it now because I really like the film. I think it is ambitious and bold and will generate a lot of discussion. For me, that’s an exciting thought,” says Reid. ”I never had any career ambition to pursue anything in the film world. I love movies, but I was always more familiar with the literary world. I feel kind of strange and lucky.”