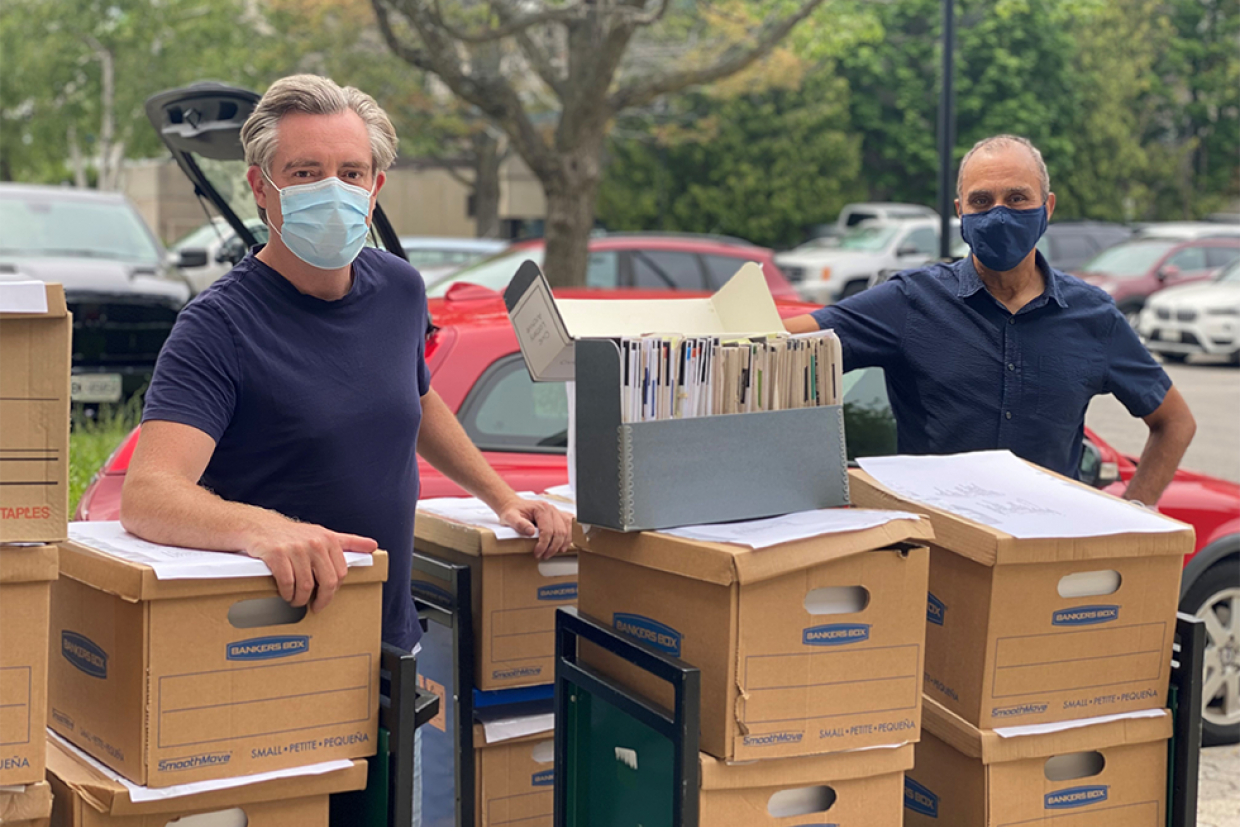 FAS Donation Gives Insight to the Future of Democracy

Thanks to a generous alumni donation, Queen’s University Archives is now the proud owner of the world’s largest collection of policy-making chronicles, opening the door for critical research by students on deliberation and the future of democracy.

The donation comes from Peter MacLeod, MA’02, founder and principal of MASS LBP, a company that conducts citizens’ assemblies.

The donation from MASS LBP will be known as MASS LBP fonds d'archives on Democratic Innovation and Deliberation at Queen’s University. Spanning almost 20 linear feet and data from around 40 projects from citizen deliberations, the collection chronicles approximately 55,000 volunteer hours to policymaking in Canada. This collection is the largest of its type globally.

MacLeod delivered the donation of 13 years’ worth of data to Department Head of Political Studies, Dr. Jonathan Rose, MA’89, PhD’93, and the Faculty of Arts and Science (FAS) last week. MASS LBP is a company that bridges government and citizens by creating “civic lotteries” where citizens participate in providing direction to policy makers through deliberative exercises. Included in the donation are demographic data about participants, learning materials, invitation letters, and final reports. It represents the largest single source of these sorts of citizen engagement exercises in the world.

“It has been almost 20 years since I started my MA at Queen’s,” says MacLeod. “It is a delight to return to campus to make what I hope will be a helpful contribution to important research on deliberative democracy.”

Dr. Rose, who both instructed and supervised MacLeod, says the archives will be a boon to researchers who work in his area of citizen engagement. “This donation is going to be a huge benefit to researchers, and I’m excited it’s being housed here at Queen’s.”

“Peter’s donation comprises approximately 7.5 linear metres of records,” says Ken Hernden, University Archivist and Associate University Librarian. “These unique records will not only be of great benefit to current students and researchers at Queen’s Faculty of Arts and Science and the Department of Political Studies but also to diverse students and researchers from many disciplines over time due to the records’ enduring archival values. Several of our Queen’s graduate students will be engaging with this material immediately and we are grateful to have worked with Dr. Jonathan Rose to bring this collection to Queen’s.”

The archives will be made accessible on the Queen’s University Archives database of finding aids, where students and researchers can find over 3,000 unique research collections representing over 10 kilometres of textual records, two million photographs, tens of thousands of architectural plans and drawings, and thousands of sound recordings and moving images.

“Fifteen years ago, the governments of British Columbia and then Ontario launched the first citizens’ assemblies,” says MacLeod. “These have served as examples to the world of how citizens can be engaged more deeply in the work of government. Inspired by their example, more than 300 similar projects have occurred throughout the world since. The MASS LBP fonds d'archives on Democratic Innovation and Deliberation is the single largest repository of its kind, containing more than 40 civic lotteries and materials related to citizens’ assemblies and reference panels and we hope it will grow with time. It helps to put Queen’s amongst a small group of universities where critical research on deliberation and the future of democracy will occur.”

You can view the original story on the Faculty of Arts and Science website.