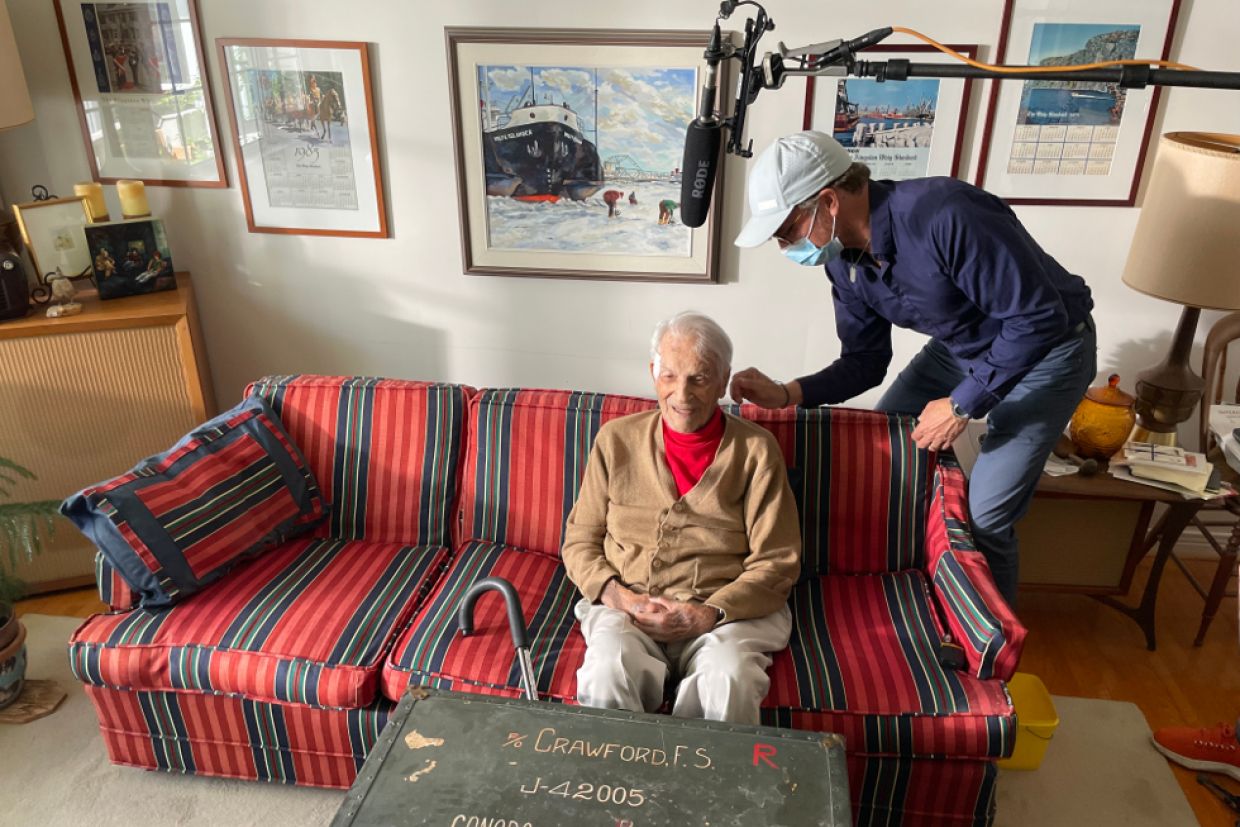 A story to inspire all Gaels

When documentary filmmaker and alumnus Mike Downie, Artsci’86, saw the story of 100-year-old Stu Crawford in the Alumni Review last winter, he knew he had to make a film about him.

And he did – with some help from fellow Queen’s alumni Mickayla Pyke, Artsci’16, Jacob Akman, Artsci’20, and Kalin Moon, Artsci’07, all of whom are pitching in on various aspects of the production.

Crawford, Arts’51, has been a presence around the Queen’s Gaels men’s hockey team for more than 75 years.

But before Crawford battled on the ice for his university, he was battling in the skies over Nazi Germany as a bomb aimer with the Royal Canadian Air Force. On April 8, 1945, his Lancaster was shot out of the sky. Miraculously, he survived and went on to study at Queen’s, where he played with the Golden Gaels from 1947 to 1951.

“I had survived Hamburg. And I was lucky as hell to survive that one,” Crawford told filmmakers. “When I survived that, I figured I could survive anything… even playing McGill.”

Downie says the Queen’s community will find much to admire in Crawford’s story.

“Stu Crawford’s life is truly inspiring,” says Downie. “It’s a story about believing in yourself, finding your team, and then trusting that those friendships will see you through life's challenges, that sooner or later, we all must face.”

Shot over the summer, the film, which was a collaboration between the Office of Advancement, Athletics and Recreation, the Queen’s Department of Film and Media, the Kingston Film Office, and Downie’s Courage Films, will make its première at Homecoming.

“Stu’s got a wonderfully uplifting and timely message for Queen’s students and alumni alike,” says Downie.

What: Reconnect with teammates, meet current coaches and student athletes and enjoy an exclusive première of the film. Attendees will receive a ticket to the Gaels' women's hockey game at 7:30 pm at the Memorial Centre against Brock University.
When: Saturday, Oct. 29, 2022, 4-6 p.m.
Where: Mitchell Hall