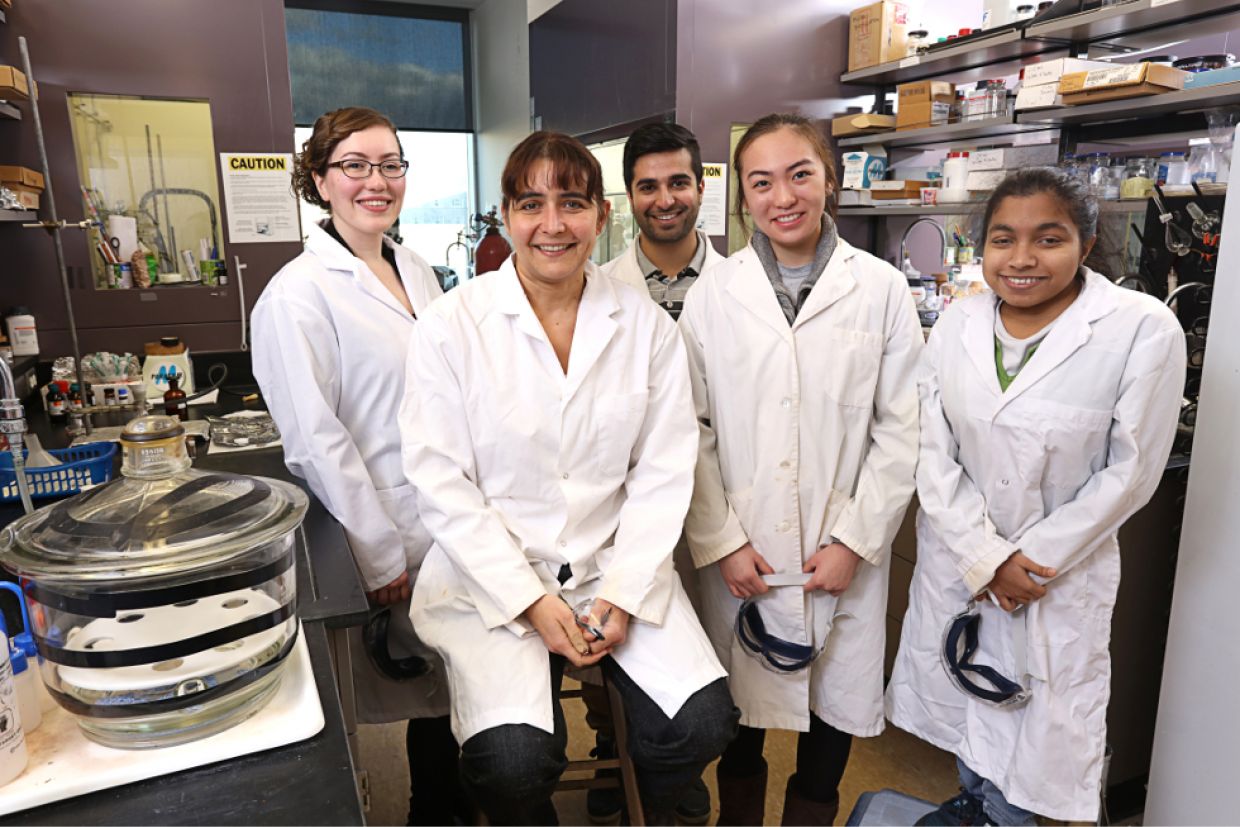 In her homeland of Nepal, Januka Duwadi, MSc’21, says she never had a chance to work in a sophisticated lab like the ones she now uses at Queen’s. So her graduate supervisor, Dr. Anne Petitjean, went out of her way to spend extra time and make sure Duwadi learned how to use all the lab equipment.

“She is not only one of the most experienced, hardworking, supportive supervisors one could ever ask for, but she is also a guardian who always inspires,” says Duwadi.

Inspiring, dedicated, and supportive are words many students use to describe Petitjean, who is known for going above and beyond to help her students succeed in the classroom and the lab.

Volunteering to do extra tutorials, creating a friendly environment for a program that attracts many students of different cultures from around the world, and encouraging students to apply for research grants and academic scholarships are some of the reasons Petitjean is this year’s recipient of the Alumni Award for Excellence in Teaching from the Queen’s University Alumni Association.

“It’s a real honour because the nomination comes from students,” says Petitjean, who had more than 20 grad and undergrad students write letters to support her teaching award nomination. “It’s nice to see the appreciation for formal undergrad teaching and the more hands-on practical aspects of graduate supervision.”

Petitjean is the type of professor who prefers open-book exams with no time limits because she wants students to be critical thinkers and go beyond memorizing lists and facts. She prefers to test students’ ability to apply concepts they have learned. The added bonus of no time limits is that it helps international students who struggle with the language barrier.

“It felt very unfair to ask people to write as fast as others when we have people coming from different cultures,” says Petitjean, who has been teaching at Queen’s for 15 years and is originally from France. “My interest is more about critical thinking and students using the material they have learned. You wouldn’t ask a poet to write a poem in two hours. You would let them work with the material and create something.”

Petitjean also helps her students excel by encouraging them to apply for scholarships and present at conferences. Some students underestimate themselves, so she gives them a nudge and will help them with the application process. “It’s not a failure if you don’t get something you applied for,” she says, “but sometimes they don’t understand that.”

Yushi Liang, MSc’21, earned a CGS-NSERC scholarship and the Arthur B. McDonald Prize for Academic Excellence, thanks to Petitjean pushing her to be the best chemist possible. Petitjean inspired Liang as a student and now as a teaching assistant. Liang stays long after labs to help her students with their questions, just like Petitjean does with her students.

“She is the best professor, supervisor, and mentor I ever had,” says Liang.

The Alumni Award for Excellence in Teaching was first given out in 1975. Each recipient receives $5,000, which Petitjean plans to use for a research project with her students.