Research: Design and Application of a Funnel and Gate Barrier System for PCB Remediation in the Canadian Arctic

Excavation of PCB contaminated soils at the former military base at Resolution Island , Nunavut is well underway. It is not possible, however, to excavate all the PCB contaminated soil because some is trapped in the fractured bedrock while some is present on very steep terrain that cannot be accessed for logistical and safety reasons. Currently much of the contaminated surface soil is stabilized by lichens and dwarf plants or by compaction since it has been undisturbed for many years. Excavation of this soil will leave a small amount of material in place, which will be much more subject to erosion, particularly runoff. In order to control the mobilization of this material within the drainage system after excavation is complete, permanent barrier systems were proposed.

The application of geosynthetics as filters and sorbents in a funnel and gate barrier system is being investigated. Prototype barriers will be designed and constructed at the site and the performance studied. Laboratory research will involve testing the suitability and efficiency of various materials to remove contaminants from water mixed with soil from the site areas under various conditions in order to mimic changes in temperatures, wind speed, water flow, filter thickness, clogging potential etc. In addition fundamental parameters such as partition coefficients, kinetic constants, permeability and permitivity will be determined. 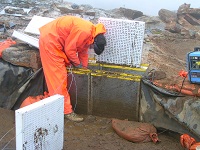 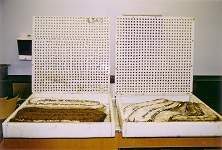