Classics had one student presenting at the 2020 Inquiry@Queen's conference held on March 12th and 13th.

Elyse Richardson presented her research at the Pizza with Posters session held in the Learning Commons in Stauffer Library on March 12th; the posters continued to be displayed for the duration of the conference.

The Museum That Queen’s Gave Away: Rediscovering the Queen’s Museum of Near Eastern Archaeology
Presenter: J. Elyse Richardson, Classical Studies
Faculty Supporter: Dr. M. Barbara Reeves
On October 26th 1954, a Museum of Near Eastern Archaeology opened in the Old Arts Building (modern Theological Hall), the home of Queen’s Theological College. The Museum had been conceived of and executed by Dr. A. Douglas Tushingham, a Biblical Archaeologist and scholar of Old Testament criticism, who came to work at the College as professor. The Museum only remained open for a little over one year, 27 until Dr. Tushingham, who had left Queen’s to accept a job with the Royal Ontario Museum (ROM), requested the items. Both Theological College and Queen’s University subsequently agreed to dismantle the museum and transfer the materials to the ROM, where the items remain today. This project reveals how the Museum came into being, what its function at Queen’s was, and the context surrounding the sudden and tragic loss of such a culturally and educationally significant collection. 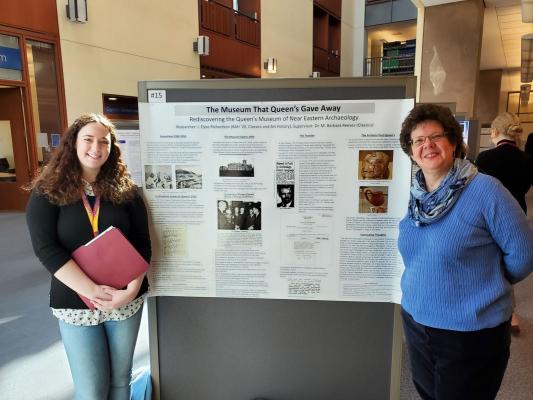 The research collected has come from a variety of news sources, online publications, and archival material provided by Queen’s Archives and the ROM Registration Department. As a result of this study, I and my professor (Dr. Barbara Reeves) are establishing through Queen’s Library an online exhibit featuring items from the original museum, as a way of amending the past and providing the educational resources initially intended through the museum’s establishment. The story of this museum, and the journey its collections took, raises important questions in the field of Museum Studies such as the responsibility cultural institutions have to promote cultural heritage, and the importance of modernizing 21st century collections to include online databases.