I missed the pancakes, but I didn’t walk away empty handed. 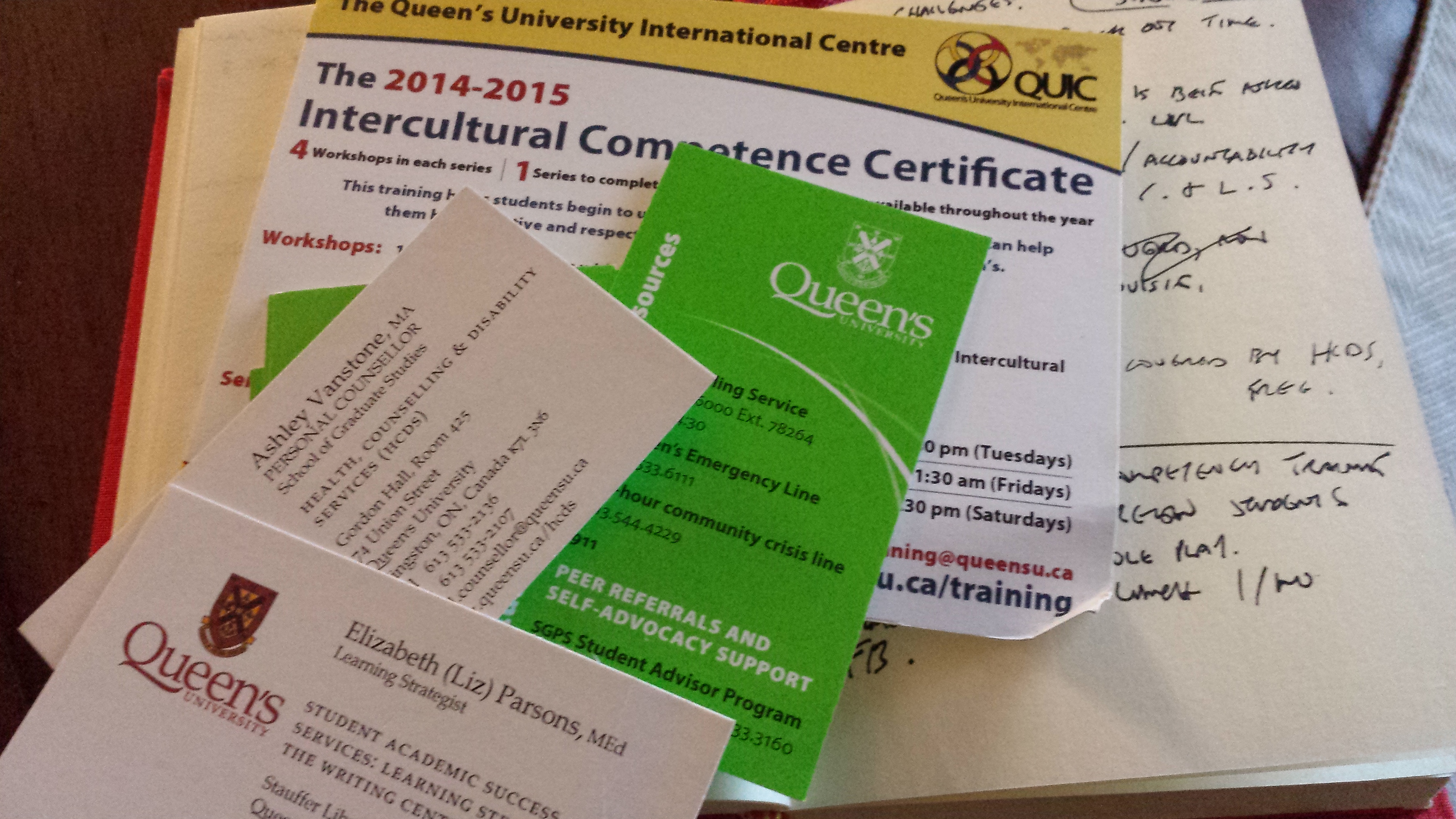 Not having spent any time in the old gymnasia, I found my way in through what was supposed to be the accessible entrance and was guided to my destination by helpful volunteers.

As people fanned themselves with handouts in the hot gym, I learned about a handful of certificate programs for so-called “soft skills”—matters of professional development like media training, entrepreneurship, intercultural competency—that would be either launching or re-launching as of September 8th. These included MITACS, The Versatile PhD, and  My Grad Skills.ca (which I had the chance to pilot, but missed the boat). A video promo for the latter marked the distance recently traveled by the academy in viewing alt-ac post-grad career paths as viable options, rather than heresies.

Turning up her down-under accent, the always affable Colette emphasized a number of student resources, including QUIC (Queen’s International Student Centre), saying that if she could reach honourary Canuck status during her time working at Queen’s, so could anyone. Among the events to come, you’ll remember from the weekly newsletter she sends out, are: the annual sidewalk sale (Colette recommends the sidewalk sale for bargains on houseplants and t-shirts—is there a connection? We’re not sure); the Recreation and Athletics open house next week (show up early to get in on certain classes for free—just pull up a mat next to Colette); and don’t forget, if you miss your photo ID pick up/validation time this Thursday, the service will be available as of Monday at Gordon Hall.

Wrapping up, the throng of students exited into the neighbouring Ross gym past a table set up with volunteers handing out tote bags. From among the dozens of organizations present I got to chat with Emily Marshall from the Agnes Etherington Art Centre, Liz Parsons from Queen’s Learning Strategies, Ashley Vanstone the SGS Graduate Counsellor, and Cathy Lemmon from QUIC.

Ashley’s message was perhaps the most parsimonious—he just wants you to know he exists and that you can go see him for free under your student health plan. His service is a new one to Queen’s as of last year and in addition to individual counselling, the programs he offers have been going like gangbusters!

I had a specific request for Liz, which was to get the punchline on what “Learning Strategies” practically means. She said that she, too, works with students one-on-one, for instance helping them find ways to block out their time, to maximize time-on-task, and adjust to the demands of graduate work in the transition from undergrad. Likewise, she and her colleagues also offer support through events, such as the Dissertation Bootcamp (jointly organized with the SGS and the Writing Centre).

Cathy from QUIC made sure to clarify, first and foremost, that the International Student Centre is for domestic students, too—and they have soup. Sign up to QUIC’s Facebook page to get the drop on the date of their monthly community-building luncheon. Handing me a card with three workshop dates, Cathy pointed out that QUIC was as much in the business of promoting Canadian students’ intercultural competency (one of those soft skills becoming so sought after in job candidates) as acculturating international students to the quirks and norms of Canadian social contexts.