Welcome (Back) to Queen’s and Enjoy Your Honeymoon

Welcome to Queen’s University, to the city of Kingston, and to our special little place on the Internet called Gradifying. I’m the Chief Editor, Dustin, with a little preamble to our first post of the year from Chengcheng. This is a new academic year, so I thought I’d give a quick introduction to Gradifying for those who have just found us. As an add-on to our brief description in the ‘About’ tab above, we’re a group of five graduate students (this is who we are, more specifically), all at different phases on our programs, who are going to write to you every Monday on all things related to being a grad student. Sometimes they will be specific to Queen’s – because we’ve got some great things here for us that we don’t know about until someone tells us – but mostly they’ll be topics that are (hopefully) useful for graduate students wherever your desk may be. Each month we’ll pick a theme and each of us will write on it from a different perspective. We’re hoping to give pretty good coverage, and when we’ve missed something that is important for you, that’s where you can step in and give us your feedback in the comment box at the bottom of every post, or go ahead and send an email. I like emails, and it’ll give me something to read other than the conference and spam journal invitations. This month we’re going to come at you with some information to help get you oriented to grad school and Queen’s, so it’ll be pretty first-year-centric. But who knows, for the returning student there might be some good stuff that you missed out on last year(s). Let’s get going. We’ve got a lot to talk about.

A whole new school year is just about to start. And here I am, having flown 18 hours from Beijing to Kingston, to embrace my second and final year as an international graduate student at Queen’s. Although the jet lag syndrome still haunts me, I’m more than happy to write the first blog on Gradifying.

With this good timing of returning, I’m gonna share with you about my own experience of studying abroad, basically basing on the honeymoon phase theory. And because there would be a series of blogs on various topics that relate to graduate life at Queen’s, I’ll write in a relatively general sense.

I can still remember the first couple of weeks last year at this time. Everything was new and exciting to me. I settled down in a fancy big house close to downtown with two sweet girls. I was spoiled by the beautiful environment here, no fog, no crowds, no traffic jams, but clear sky, limpid lakes, tranquil parks. I had been a meat lover and I found the meat here is much cheaper than in my home country.

However, as courses got difficult, the TAship became busy, barely had time to cook or go to gym, and most of all, the seriously homesickness, I felt stressed.

Luckily, I didn’t let this status last long. Besides the routine academics, I focused myself in an intriguing project while not pushing myself too hard. I kept a good relationship with my language buddy who improved my English and became my friend. During the summer break, I treated myself with a stay in Paris to learn French in Alliance Française while travel around Europe, immersing myself in the natural beauty and cultural landscape. After a month’s craziness, I came back to home, and spend two months in reading, seeing friends, looking back at what I’ve been through in the last eight months and figuring out the forward path in the following school year, like how to improve my academic level while maintain the well-being; the topic of my graduation thesis; staying in Canada or returning to China after graduation; what to do after graduation, etc. During the sinking of millions of thoughts, I am now getting more focused and confident, which brings about satisfaction and impetus as I have now.

Right, I’ve been going through a “honeymoon phase”, which refers to people’s emotional variation under a new environment. 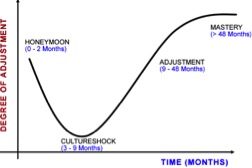 A graph of what patience looks like. In a nutshell, it gets harder before it gets better.

I’ll skip the part of explaining this theory, partly because it is quite clear, and direct to some suggestion on how to get over the culture shock according to my experience, hopefully it will benefit you whether you’re a newcomer at Queen’s or not.

How many of you can still recall why you chose to study abroad? It’s not easy to get an offer from a foreign university, especially for graduate students. What did you aim at with all the effort? That’s to say, it can’t be a destination, but a starting point. Then, it’s time to think about where does your new life lead? Academic circle, a job position, immigration, or just “wait and see”?

The biggest temptation of studying abroad is that it opens millions of opportunities for you. But never get lost in this freedom, it’s always good to have a clear-cut goal that constrains and spurs you. And if possible, cut down that goal into a series of small phased goals. Then all you have to do is achieving them one after another.

Well, all those “of courses” are just facts, not obstacles or excuses for the unsuccessful cultural transition. Therefore, instead of being terrified or depressed by the culture shock, you should try to look at it from a different angle, to embrace it. Admittedly, this could be really hard, but you can never conquer the circumstance but adapt yourself to it. So why not seeing it as a positive change in your life, accepting the new culture, and turning the adversity into opportunity?

We all agree on the necessity of being happy, especially under challenging circumstances, say, studying abroad. What is the point of stretching yourself so much if you’re not being happy? Unfortunately, people usually ignore the knowledge of happiness. It’s far more than keeping in mind that you should be happy. In addition, Happiness doesn’t mean being playful at all times. The true happiness comes along with productivity and achievements.

I strongly recommend the Positive Psychology course, one of the most popular courses in Harvard, taught by Dr. Tal Ben-Shahar on how to be happy. It can be found on YouTube, and it has a lot more suggestion on happiness than I can offer in this short blog.

I’ve been undergoing the honeymoon phase, and will be in the future, as everyone. By writing this article, my intention is not setting myself as an example that has successfully conquered the cultural shock, I’m still learning to master the “adjustment” and “mastery” phase. But the suggestions above, some come from others and some come from myself, were really helpful, and I hope them work for you too.

The honeymoon phase is everywhere, which can be applied to various living status. Simply going back to school can be a honeymoon phase, no matter for foreign students or native students. The importance is to realize it, face it, and master it. Good luck with your honeymoon at Queen’s.