Sorry I am late on my post folks! I just moved into a new apartment and decided it would be fun to repaint all my furniture (spoiler alert: it is not)

This is my fourth year living in Kingston and for the most part, I love the city. However, the nightlife is inconsistent. Some nights you can go out and the coffee shops, bars, and restaurants are packed and full of energy; other nights you can walk down princess and barely see a soul.  Many young people have expressed this same sentiment, but unlike me, they took steps to figure out this problem. Two graduate students, Amanda Maracle and Meghan Mckay in combination with Kingston Economic Development Corporation, collected data on what young professionals found lacking in the Kingston scene and what they would like to see more of.

Based on their findings, they hosted a TedxSalon on “Reviving Kingston Night Culture”. It targeted both young professionals and business owners. It was a small group and it would have benefited from more young professionals. I know I am not alone in complaining about the Kingston scene so I wished more fellow complainers showed up. 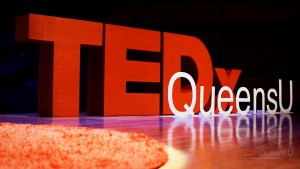 If you have not been to a TEDxsalon event, it was very cool! First, we watched ted talks about reimagining city spaces in order to encourage people to engage more with them. Then, we brainstormed some of the issues and narrowed down on one. We the had to come up with a creative and innovative way to approach the problems (the sky was the limit). Finally, we had to bring it back to reality by finding a tangible, reversible, and cheap-ish way to pilot those ideas. Also, there were cheese twists.

Some of the cool ideas to come out of it were:

– utilize market square more during the summer through the creation of a night market with food and music. Or wouldn’t it be fun if the square was filled with games like giant Jenga, shuffle board, and ladder toss?

– transform the alley ways to make them vibrant depictions featuring the diverse cultures in Kingston.

What I took away from this: 1) there are very simple ways in which we can foster a better night life in Kingston; 2) We can actually do these things;  3) We cannot sit around and complain about it anymore; 4) Don’t believe me, go watch the the ted talk, it was inspiring – I am convinced that we need to banish cars from princess st. and have a beautiful green space and sitting area.

What do you want to see more of in the Kingston night scene? And more importantly, why were you not at the TedxSalon? And don’t tell me you were actually working on your dissertation.