As summer approaches, a lot of sunshine are out there in nature; while in political and cultural realms, things are getting dim.

Although conscientious journalists are still fighting to shed lights on this gloomy society, nowadays it is a lot more difficult for facts and genuine voices to stand out from fake news and conspiracy.

Yet, it is not entirely hopeless.

Writers, filmmakers, TV producers, among others, are also taking initiatives. They have been bringing the dark sides of our society under the spotlight of a variety of medium, the same as the journalists do, but in a more indirect, hyperreal, and perhaps safer way.

For this week’s post, I picked four works – two books, a movie, and a TV series, which offer great reflections on social order, justice, and humanity, under today’s socio-political context.

Chris and his girlfriend Rose go upstate to visit her parent’s for the weekend. At first, Chris reads the family’s overly accommodating behavior as nervous attempts to deal with their daughter’s interracial relationship, but as the weekend progresses, a series of increasingly disturbing discoveries lead him to a truth that he never could have imagined.

The ingenuity of this film is its blending of cinematic suspension and critiques of racism, as well as trifles in interracial relationships and futuristic scientific inquires of bodies between races.

Moreover, you can even sense humor in this horror film.

Petronella (Nella) Oortman, a poor 18-year-old girl from the Dutch countryside, arrives at the Golden Bend home in Amsterdam of the wealthy merchant Johannes Brandt, who married her a month earlier. She steps into a house of secrets held by Brandt’s ascetic sister Marin, the servants Cornelia and Otto, and Brandt himself, who treats her more like a friend than a husband. Brandt gives her a wedding present of a dollhouse designed to look like their nine-storey home in miniature, and she engages the services of a local miniaturist to add realistic furnishings to it. The miniaturist, whom she never meets, begins sending her lifelike dolls and furnishings that are eerily accurate and even seem to predict the future. As webs of danger close in on the characters, Nella wonders if the miniaturist holds everyone’s fate in her hands.

The moment that I finished the last sentence of this book, I could not help thinking: how fascinating it would be if this story could hit the screen, owing to the strong sense of tableau of Burton’s writing, as well as her clever choice of incarnating a period of Amsterdam history, social values people held during that time, struggles between early capitalism and religion, unequal powers between different classes and between men and women, subtle relationships in a household, all in an animated dollhouse.

In a dystopian near-future, the totalitarian and Christian fundamentalist government of Gilead rules the former United States amidst an ongoing civil war. Society is organized along a new, militarized, hierarchical regime of Bible-inspired social and religious fanaticism and newly-created social classes, in which women are brutally subjugated, and by law are not allowed to work, own property, control money, or read. Widespread infertility due to warfare-induced environmental contamination has resulted in the conscription of the few remaining fertile women — called Handmaids, according to Biblical precedent — who are assigned to the homes of the ruling elite, where they must submit to ritualized sex with their male masters in order to become pregnant and bear children for those men and their wives.

The main character, Offred (Moss), is the Handmaid assigned to the home of Gileadan Commander Fred Waterford (Fiennes) and his former-televangelist wife Serena Joy (Strahovski), and as such is subject to the strictest rules and constant scrutiny; an improper word or deed on her part can lead to her execution. Offred, who is named after her male master like all Handmaids, can remember the “time before”, when she was married with a daughter and had her own name and identity, but all she can safely do now is follow the rules of Gilead in the hope that she can someday live free and reunite with her daughter. 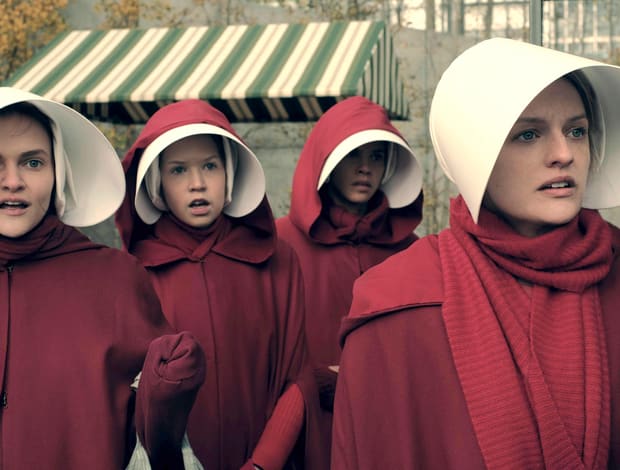 I believe the best way to understand this story is to examine the book and the TV series as one.

Adaptation is not simply a copy of the original. What are changed, what are missed, what are added, are usually where discourses are generated.

One of the methods of productive reading/watching is placing the readership/spectatorship back to the time period that the work was being produced, while drawing connections/comparisons in between. For example, in the book there were no black characters while in the TV series we see African American faces (though not as leading roles), which clearly accommodates today’s social context.

When reading the book, there was a paragraph that stroked me deeply:

“Nothing changes instantaneously: in a gradually heating bathtub you’d be boiled to death before you knew it. There were stories in the newspapers, of course, corpses in ditches or the woods, bludgeoned to death or mutilated, interfered with as they used to say, but they were about other women, and the men who did such things were other men. None of them were the men we knew. The newspaper stories were like dreams to us, bad dreams dreamt by others. How awful, we would say, and they were, but they were awful without being believable. They were too melodramatic, they had a dimension that was not the dimension of our lives.”

In the TV series, that is how we see a society changes its form totally before anyone is awaked (through sporadic flashbacks of old lives in the “normal” society).

I think we are now in a similar situation.

And it is not too late to take actions for the sake of peace and humanity.