Let’s Take Back The Night at Queen’s 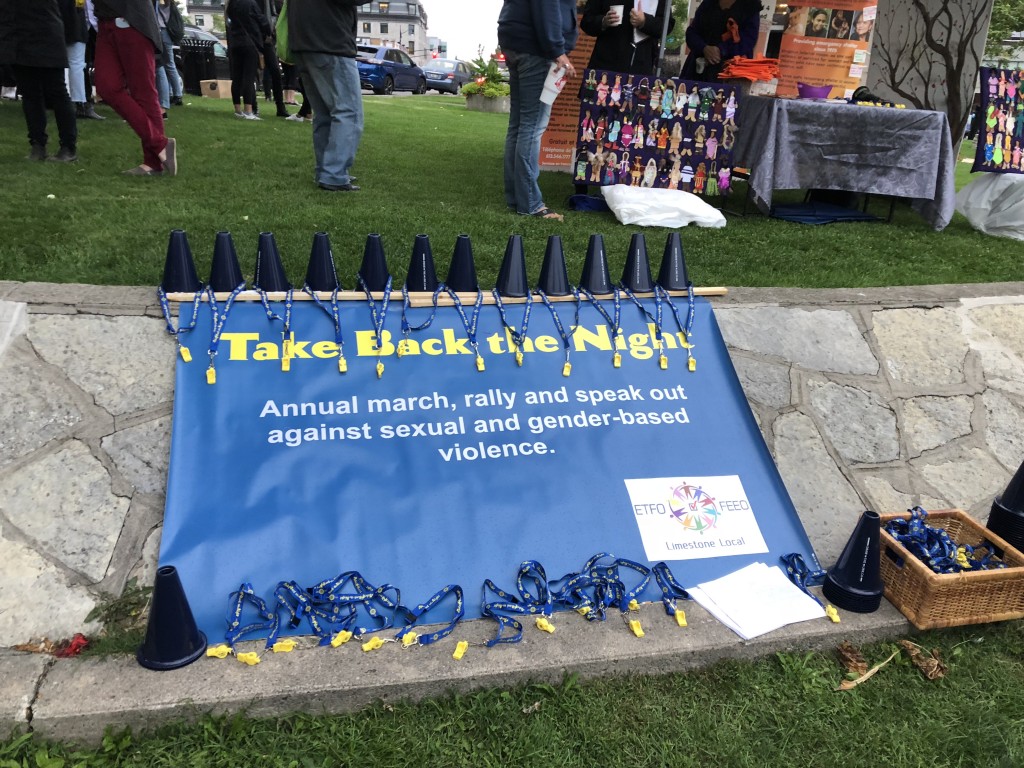 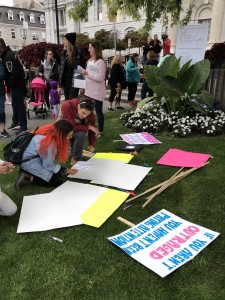 Participants make their signs for the March

Last Thursday September 20th, a large group of individuals from Queen’s University and the wider Kingston community gathered at the Confederation Basin across from Kingston’s City Hall. Despite light rain and dreary weather, the atmosphere was welcoming and hopeful; some were seated on the grass making signs, others were chatting with the community organizations present, music was playing, and snacks including cupcakes with blue icing were available for survivors and allies alike. As it neared 7pm, the group became larger and soon the speeches began. This was the beginning of the annual Take Back the Night (TBTN) march that would wind it ways through downtown Kingston’s streets. Similar marches were held in communities across Canada and internationally advocating for the end of sexual and gender-based violence. This year marked the 40th year of TBTN and as the speeches made clear, though there has been substantial progress over the past 40 years, so much work continues to need to be done. As the Sexual Assault Centre Kingston (SACK) explains on their website, one in three women and one in six men will experience sexual violence in their lifetime. As sexual, relationship, and domestic violence affects so many lives, the purpose of this event is to show solidarity with women as they are disproportionately affected by violence, and empowering those who identify as women to come together and reclaim the evening streets, and encourage all of us to take further action towards change. 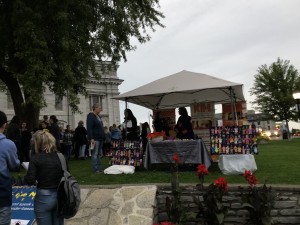 The Kingston march was organized by SACK (a not-for-profit organization that gives free, confidential support and counselling for all survivors as well as a 24-hour Crisis and Support Line), in collaboration with Consensual Humans at Queen’s University (an AMS group that strives to promote discussions about consent culture across our campus) and Kingston Interval House (a not-for-profit organization that supports women and children experiencing violence and works with the community to eliminate violence and oppression). These groups do extensive advocacy and awareness work in our community all year working towards ending sexual violence. The march was also supported this year by the Vogue Charity Fashion Show, a Queen’s University student-run group that raises money through their annual fashion show (a highly anticipated event) for an organization of their choosing, this year being SACK. Also present at TBTN was the Elementary Teachers Federation Ontario who had brought with them a postcard writing campaign to Doug Ford against his decision to revert the sexual education curriculum from 2015 to the 1998 one, a move that means topics like cyber-bullying or gender identity would be removed from the curriculum. 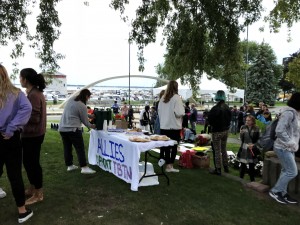 The aim of Take Back the Night, in particular reclaiming women’s right to safety, is something I’ve been thinking about a lot recently. This past summer, the Queen’s University’s Sexual Violence Prevention & Response Coordinator organized a Wen-Do Women’s Self Defense course that a friend of mine encouraged me to join. The two-day course ended up being an eye-opening experience I didn’t expect. While we learned numerous ways to physically defend ourselves in a range of situations (from punches to blocking attacks), we also learned how to defend ourselves verbally, how to defend our boundaries, and not be afraid to “make things awkward” if someone invades your personal space. We learned that though we may feel the need to stay quiet in situations, we can and should speak up – or even yell.

Between self-defense exercises, there were discussion periods where we sat in a circle and talked about times where we were made to feel uncomfortable or unsafe, whether it was walking down the street in Kingston, in a relationship, or even a classroom or work space. We were encouraged to share stories where we were successful in stopping or shutting down harassment. Hearing these successes, whether it was telling off a harasser on the subway or seeking out help as a bystander, served as a reminder that there are options available to you. After the two-day program, I felt empowered with the knowledge of how to protect myself and others. I also felt saddened by the idea that a program like this needs to exist in the first place. Women should not feel unsafe when they walk home from the library late at night, they should not have to walk with their keys strategically positioned between their fingers “just in case”, and they should not have to make a plan to text a friend when they make it home safe, and yet these are things we do everyday to the point that they are normalized. The Take Back the Night movement reminds us that this shouldn’t be the norm, and there are things we can all do to raise awareness of the prevalence of violence against women. 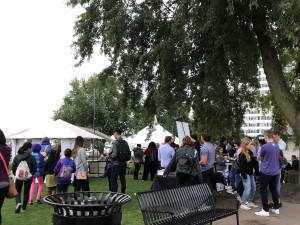 Another view of TBTN

A way to start could be getting involved with one of the community groups mentioned above, like volunteering with the Sexual Assault Centre Kingston by working on the Crisis & Support Line, accompanying survivors to the hospital or to the police, or facilitating workshops. The Kingston Interval House needs volunteers for a variety of positions from joining their Board of Directors, fundraising and administrative duties to public education and assisting with their quilting program. As graduate students we are eligible to join AMS clubs so you might consider being part of Consensual Humans at Queen’s University to promote consent awareness or assist the Vogue Charity Fashion Show in their fundraising efforts. You may be interested in participating in the Queen’s Flip the Script – EAAA Program – a 12-hour program for female-identified Queen’s students (ages 17-24) to learn about relationships, sexuality, sexual assault and resisting sexual coercion, or get involved with Queen’s Walkhome, a safety service open every night that walks students home from the JDUC building on campus or will meet students elsewhere who give them a call. You could also get involved with the Sexual Health Resource Centre on campus, located in Room 223 in the JDUC building, as they recruit volunteers at various times throughout the year and train them so that they can provide information session on safer sex, sexuality and sexual health. If you have other suggestions, please let me know in the comments. This is the time for all of us to take action and make our campus and our community a safer place.