A reading for grad students 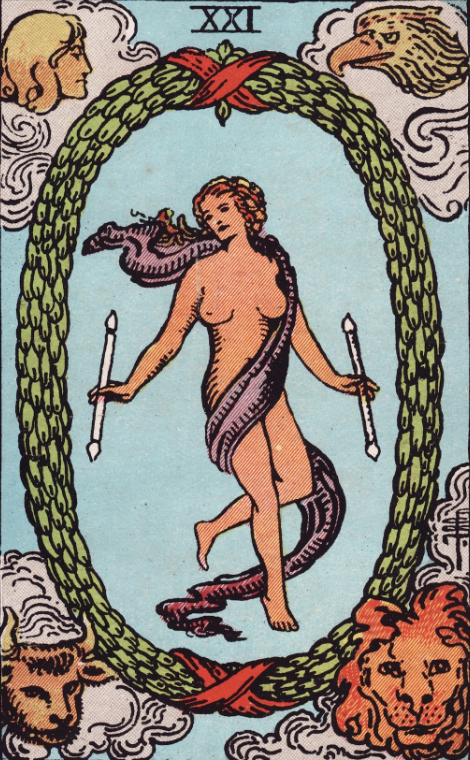 This is my final post for the year, and my last chance to make good on an offhand pitch I made to a friend and fellow grad student near the start of this blogging cycle—a collective reading for grad students at Queen’s.

For many of us, academic work continues into the summer months. The obligation to work at a desk can be especially bleak when the weather outside somehow makes inhabiting a sandal-wearing, gelato-eating, sports-playing version of yourself and dancing to the sweet, sweet synths of Fantasy until you are drenched in sweat sound like a great time. Curious about what we might expect in the coming season, I invited my friend to meet at one of our usual spots, cards at the ready. We sat for a while at the coffeeshop. She thumbed through Jessa Crispin’s guide, discussing what spread might work best. As I shuffled the cards, one slipped from the deck in response, falling face down on the floor. This was our card—The World.

Now as a side note, my understanding of and skill with the cards are rudimentary, and my interest has been far from scholarly, although I was absorbed in Crispin’s brief account of their history, including their particular allure for artists and writers. I am fascinated, however, by all the ways stories can be constructed, as Italo Calvino does in The Castle of Crossed Destinies, with the cards’ loaded imagery. What might be gleamed from this illustration of a figure, barely draped and hovering in the centre of a garland, looking one way (backward?) while stepping the other (forward?), a staff in each hand? And the heads (a bull, a lion, an eagle, and a human) set in each corner, each in relief against the clouds?

The general symmetry of the composition might suggest stability or wholeness, as does the closed wreath. Perhaps we’ve reached the end of a process, or a project has come to a close. A closer examination shows that even while looking back, the figure appears in motion, legs staggered, hair trailing. I thought immediately of the interminable quality of academic work; of not knowing when or how to stop working (what is a weekend?); of being unable to contain projects that endlessly mutate in different directions in response to new questions (and are more interesting, if also more taxing, for it); of how even completed projects allow for only the briefest moment of reprieve as the next undertaking is already in view. Looked at another way though, the state being depicted (and maybe merits celebration) is one in which the figure is suspended between having made it through and achieved something and moving on to the next endeavour. Perhaps we can find in this a reminder. As the summer rolls around and our projects seem to stretch unceasingly into the future, perhaps we can trust that the work we’ve accomplished up until this point, even without the validation of a passed course requirement or conferred degree, already constitutes the completion of something, an achievement deserving of our reflection and recognition. Without dropping everything to douse ourselves in self-praise and congratulatory confetti, we can orient ourselves towards where we think we want to go next and at least take a second to look, approvingly, at what we’ve done so far.

An uncharacteristically optimistic send-off from me, but that seems to be what the card warranted. Best wishes for the summer.