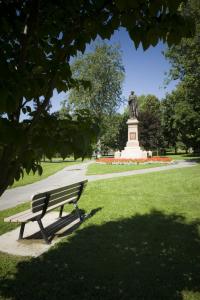 Kingston is nicknamed the "Limestone City", for its many limestone buildings, created from the bedrock on which the city was built. The city acted as the capital for the United Province of Canada from 1841-1844.

For the many cultural communities and their stories in the development of the City of Kingston, the Stones Project presents the stories of unique Kingston experiences through social history tours, complete with maps and audio.

Kingston is also the entry point to the Rideau Canal, the longest continuously operated canal in North America, which links the lakes and rivers between Kingston and Ottawa with a series of locks that are operated by hand much as they were when the Canal first opened in 1832. It provides wonderful recreational opportunities as well as a living history lesson. The Rideau Canal is a National Historic Site, and became a designated World Heritage Site in 2007.