In 1793, the Qianlong Emperor rebuked every request made by Lord Macartney in the first official diplomatic meeting between the Chinese and British governments. The British were desperate to gain access to the wealth and goods of the trading network within the Qing Empire, but the Qianlong Emperor remarked that the Celestial Empire had no need of anything from inferior civilizations beyond its borders.

Fifty years later, through war and gunboat diplomacy, China would be forced to open its coastal ports to foreigners, marking the beginning of a period known today in China as the “century of humiliation.” During this period, the Chinese Maritime Customs Service operated as an institution of imperialism, to safeguard and develop the interests of a rapidly expanding global empire.

A Chinese government agency, staffed at the highest levels by Westerners, the Customs Service was a complete reversal of centuries-old commercial, legal, and diplomatic processes, that upended the worldview of the Qing Empire. This lecture will explore the history of the Customs Service and consider its role in the history of Anglo-Sino relations, the expansion of the British Empire in the nineteenth century, and the creation of a modern integrated world. 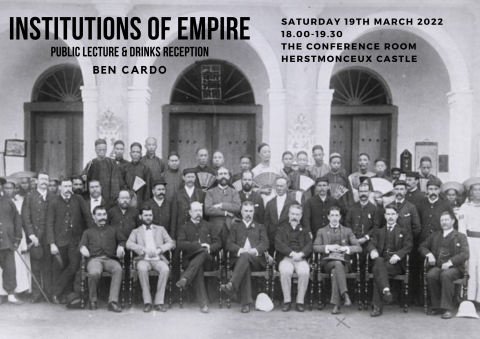