Queen’s Global History Initiative and the Poverty Research Network at University of Glasgow are proud to partner for the upcoming conference: “Poverty and Scarcity in Global History,” Feb. 3 & 4, 2022.

Poverty, or fear of poverty, is ubiquitous in global history. Local instances of want, shortage, and hunger have often been both causes and consequences of global processes. Global integration and trans-local interconnections since the premodern era underpinned the emergence of the global systems of capitalism and colonialism, which in turn have left us with structural inequality. New landscapes of poverty continue to be created by climate collapse, deepening for many the omnipresent fear of not having enough to get by. Nonetheless, our understandings of poverty’s multiple meanings have been historically shallow.

Poverty and Scarcity in Global History will interrogate the interface between poverty, scarcity, and the field of global history through three broad areas: production, power, and affect. How is poverty produced through global processes, and how are questions of resources—animal, organic, and nonorganic— tied to the production of poverty and its concomitant scarcity? Drawing from interdisciplinary vantage points and perspectives from both the premodern and the modern era, the conference seeks to uncover the agentive roles that turn real or perceived scarcity into structural poverty. We will examine the important role that the material conditions of poverty, and socio-political fears and anxieties of poverty, have driven global history across interlocking temporal and spatial scales and how ideas about poverty and scarcity have shaped the emergence of global connections and processes.

We aim to examine the role ideologies played in producing, shaping, limiting, and undergirding poverty by flowing through the globally encompassing power lines. Beliefs about the scarcity of natural resources in the late medieval and early modern periods shaped the course of transitions to capitalism and the pathways to global empires, creating new forms of poverty. Discrete examples from imperial British, Soviet, Nazi, among other contexts, show how scarcity was either justified or enforced according to ideological concerns that served the cause of the hubs and wheels of power. And through its global reach, capital itself has conjured up the threat of scarcity to banish its fears of abundance and crises of overproduction. How do powerplay and geopolitical processes produce scarcity, and how have social theories and intellectual currents explained, justified, and predicted scarcity as an arbiter of global poverty? Where, institutionally and in disciplinary thinking, should we locate the symptoms of scarcity that have served as the handmaiden of the powerful?

And finally, how have cultural productions of poverty and scarcity shaped global history? Whether resources, such as money, are imagined as scarce or abundant has profound effects on how societies are governed, unevenly shaping the lives of the rulers and the ruled. How do we remember scarcity, and how do such memories incite our emotions and guide our actions in navigating our worldview, agentive properties, and intellectual horizons? Alongside the material and ideological aspects of scarcity, we welcome papers that examine emotive and experiential aspects of scarcity, particularly those that evoke fear and keep alive the spectre of never-ending scarcity for those for whom poverty is a permanent home. 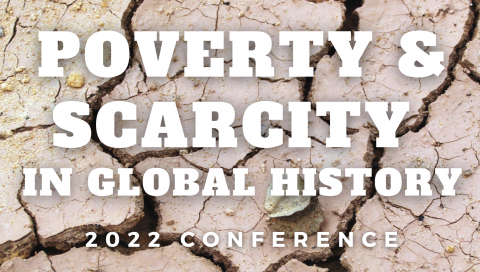 The Global History Initiative and the Department of History, Queen’s University, Canada