Crossroads will focus on towns in Canada that have gone through “boom-and-bust” periods. Specifically, the project examines the Chatham-Kent municipality in Southwestern Ontario and the community of North Buxton, the location of the Elgin Settlement which was established by William King in the 19th century for formerly enslaved persons from the United States.

Deirdre served as consultant for the series, providing background information about the area and the history of Black settlement in the region. She will also be featured in the series’ Buxton episode, which focuses on the history of the community and the people who live there today.

Deirdre’s doctoral research examines the issue of race in Canada and the United States, with an emphasis on African-American and African-Canadian history. Specifically, her research focuses on education and intelligence testing practices in Southwestern Ontario from the mid-1800s to the mid-1900s. 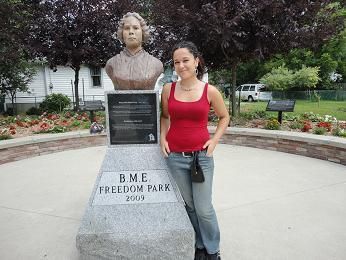