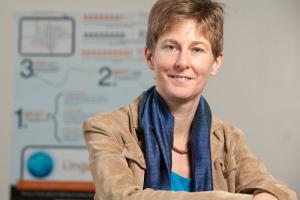 After completing a Comparative Literature PhD from UC Berkeley, Professor Hosek was a Stanford Fellow in the Humanities until coming to Queen's in 2007. She has published on literature, film, urban mobility cultures, critical pedagogies, critical theory and neuroscience, digital technology, and the women's movement. Her monograph analyzes the cultural influences of the global South on the North through Cuba and Germany. Sun, Sex and Socialism: Cuba in the German Imaginary (University of Toronto Press, 2012) received support from the Berlin Studienstiftung des Abgeordnetenhauses, the DAAD, the Humboldt and the Mellon Foundations, UC Berkeley, the National Coalition of Women in German (WiG) and Queen's. An article stemming from it won the 2008 National Coalition of Women in German Best Article Prize and has been published in three languages.

Professor Hosek's current major projects -- a monograph on urban mobility cultures and the peer-to-peer language exchange e-tool  LinguaeLive   -- have each been funded by the Social Sciences and Humanities Research Council of Canada and internal grants. Professor Hosek is also co-organizing the Faculty of Arts and Sciences and School of Policy Studies lecture series Contagion Cultures https://www.queensu.ca/sps/events