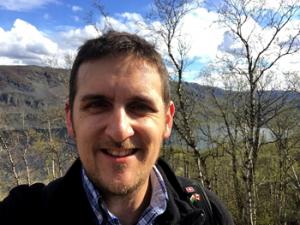 Thanyehténhas (Nathan Brinklow) is Turtle Clan from the Tyendinaga Mohawk Territory. He grew up without the language in a community that had largely lost its heritage language as an everyday spoken language.  Nathan’s interest in the language was sparked through the “Mohawk Hymns” he sang with his grandmother as a young man and following his formal studies, he went on to study at Shatiwennakará:tats, the intensive adult language program at Tyendinaga.  He now teaches in that program.

In Nathan’s experience of learning and teaching, the language and culture are inseparable.  This informs his approach to teaching constantly passing on elements of the culture as they present themselves in the language.  Kanyen’kéha (Mohawk) is also a descriptive language and paints vivid pictures with the way words have been created, so learning to recognize the actual meanings of the words, allows the contemporary speaker to actually “see” how previous generations encountered and interacted with the world.

Professional interests include second language acquisition methodologies, especially for adults; the canon of Mohawk Hymns, with attention to the unique compositions; early Bible translations and how Christian concepts were translated using traditional ideas; and the development of the traditional Mohawk cycle of ceremonies.