Most of the exchange partners feature English as the language of instruction, although immersion in host country languages is often available.

Students are eligible to spend one or two terms on exchange during third year, and must apply at the beginning of the Winter term of second year to be considered. The Department of Languages, Literatures and Cultures encourages students to spend a semester or two abroad to improve the language skills, immerse in the culture and experience an unique opportunity to see the world from a different perspective!

Alyssa Foerstner (BAH '14 in German and History) - on the picture in the middle- spent a year in Germany and this is how she remembers her time at the university of Tübingen:

"There is no right way to do an exchange year. For me, this has been a cultural experience. I have learned about and lived so many different cultures and am leaving with an overwhelmingly international group of friends. While I embraced Germany, its language and its ways, I visited countries all over Europe as well and was able to stay with those international friends that I met in Tübingen." 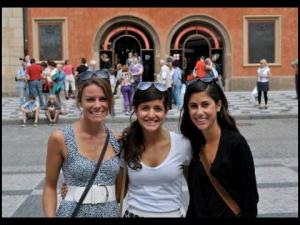