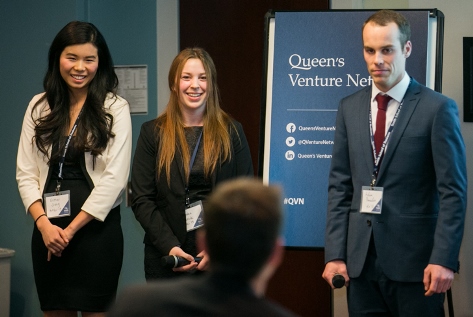 A company created at Queen’s University last summer is one step closer to launching its line of cricket-infused food products.

Gryllies recently won UPstart, a pitch competition held in Toronto by Queen’s Venture Network in Smith School of Business. The victory comes four months after the company was judged the most promising venture to emerge from the 2015 Queen’s Innovation Connector Summer Initiative (QICSI).

“Winning this recent pitch competition helped us realize that our vision – creating future-friendly protein that is good for you and the planet – continues to resonate with others,” she says. “That validation motivates us to keep working hard to get our product to market so that we can start making an impact on global food security.”

During QICSI, the team of students identified the need for more sustainable and environmentally friendly sources of protein. They decided to create a dry mix composed of cricket flour, spices and other protein-rich ingredients that can be used to replace meat in recipes. Less water, feed and land are required to produce the same amount of edible cricket product, compared with traditional meats such as beef, pork and poultry.

Gryllies relocated to Innovation Park at Queen’s University following QICSI. Ms. Baziuk and company directors Adam Beaudoin (Kin’15) and Esther Jiang (Artsci’15) consulted with local chefs and food scientists to further develop the products. Gryllies is currently finalizing its packaging and branding and hopes to go to market in May.

The $15,000 prize will support Gryllies as it embarks on a 12-month program at Food Starter, a Toronto-based food business accelerator. The program will give Gryllies access to a range of services that will help the company commercialize and sell its product.

“We were able to connect with many amazing Queen’s alumni and faculty as well as other entrepreneurs who have already reached out to us and offered their help,” she says. “The feedback from the panel of judges, who are extremely experienced in the entrepreneurial space, also adds immense value to the continued development of our business.”

Another QICSI venture, Lumos Energy Strips, took home the second prize of $10,000 at the pitch competition.

Growing entrepreneurship on-campus and in the community is a key pillar of Queen’s strategic mandate. The Queen’s Innovation Connector (QIC) builds on existing strengths to give students access to the resources, networks and mentors they need to transform their ideas into products and services. QIC’s core strength is its interdisciplinary nature, providing students from across the university with the opportunity to work in diverse teams to address important problems and identify the solutions that will yield benefits not only for the region, but nationally and globally too.