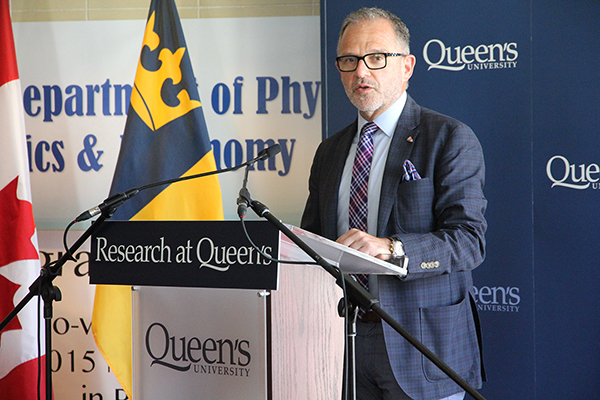 Queen’s University announced today that it has received an investment of $63.7 million from the Government of Canada’s Canada First Research Excellence Fund (CFREF) to support the creation of the Canadian Particle Astrophysics Research Centre (CPARC).

The centre aims to strengthen partnerships between Queen’s and other Canadian universities, attract top talent and build on Canada’s position as a leader in the field.

“We are very thankful to the Government of Canada for their support for the new Canadian Particle Astrophysics Research Centre,” says Daniel Woolf, Principal and Vice-Chancellor. “This funding from the Canada First Research Excellence Fund is a testament to the impact that Queen’s researchers are having in Canada and internationally in the study of the deepest mysteries of the universe. This new research centre will expand the scientific culture at Queen’s by attracting highly-skilled researchers who will lead the way on the next generation of ground-breaking experiments.”

The new centre will be headquartered at Queen’s, with members located at seven affiliated Canadian universities and five affiliated research organizations. To support the centre’s continuing and future research and experiments, 41 positions for researchers, engineers, designers and technicians will be created. In addition, positions for approximately 18 postdoctoral fellows and 40 graduate students will be created on an annual basis. Queen’s has already committed to adding seven new faculty members – including two Tier II Canada Research Chairs – in support of the centre and its research aims.

The funding will be used to establish the CPARC as the world’s leading research group in the study of particle astrophysics. Through its new and existing partnerships, the centre will be involved in many of the world’s leading dark matter (PICO, NEWS, SuperCDMS and DEAP-3600) and neutrino physics (SNO+) experiments. These partnerships will allow researchers to extract maximum scientific output from the current suite of SNOLAB experiments.

"Today's investment in creating CPARC is evidence of the government's commitment to excellence in research,” says Mark Gerretsen, Member of Parliament for Kingston and the Islands. “This funding will help Queen's researchers become global leaders in particle astrophysics and is critical to Canada's long-term success in today's globally competitive world."

“At Queen’s we have fostered a culture of research excellence and strongly encourage and support the collaborative efforts of our researchers,” says Steven Liss, [former] Vice-Principal (Research). “Through its many partnerships and the collective work of its researchers, the Canadian Particle Astrophysics Research Centre will cement Queen’s and Canada’s place as a world-leading destination for particle astrophysics research.”

Particle astrophysics is an institutional priority at Queen’s University. A leading research-intensive university, Queen’s has consistently demonstrated its unwavering support for this field since the inception of the SNO project over two decades ago. In 2014, Queen’s announced the appointment of Dr. Gilles Gerbier as the Canada Excellence Research Chair in Particle Astrophysics. Dr. Art McDonald’s co-receipt of the 2015 Nobel Prize in Physics, and the awarding of the 2016 Breakthrough Prize in Fundamental Physics, came in recognition of his leadership role in the Sudbury Neutrino Observatory team – many of whom are now leaders on the CPARC initiative.