A passion for harmony 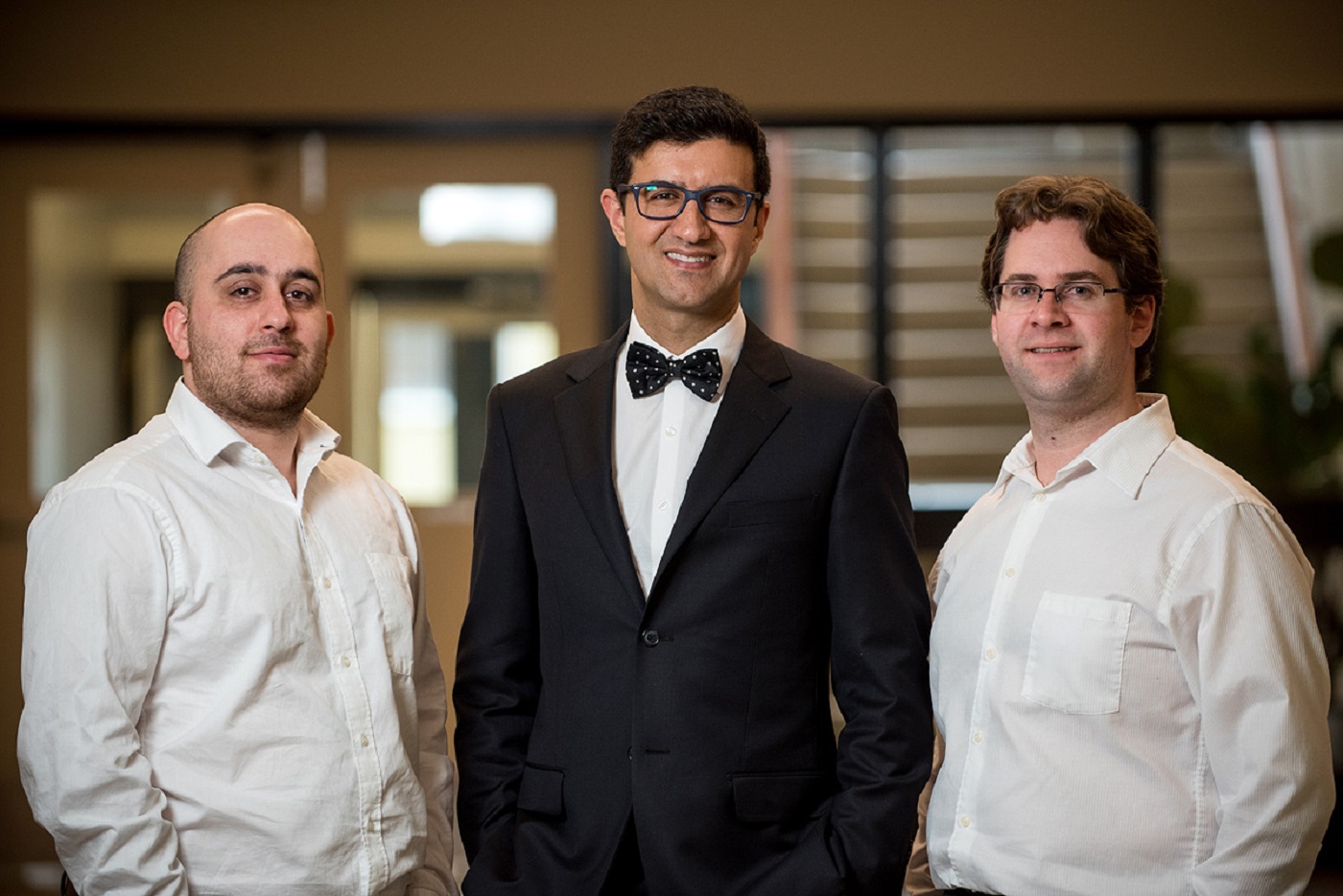 As entrepreneurs go, Shahram Yousefi is something of a paradox – a “black sheep,” as he puts it. Most entrepreneurs hope to strike it rich. Not that he’d mind, probably, but first and foremost, the professor in Queen’s department of electrical and computer engineering is looking for solutions to problems. Entrepreneurs are single-minded. Once they have an idea, they clamp on like an angry pitbull, to the exclusion of everything else. He has not one but two seemingly different ideas, both of which he is passionate about. And, in a world where new ideas and products are hailed for their “disruptive” potential, he says that at the root of what he does is “my passion for harmony.” Speaking by phone from California where he is currently on sabbatical, the passion of his work comes through. And Innovation Park is helping him realize it.

A sabbatical and a dinner date put Yousefi on the path to becoming an entrepreneur. Arriving at Queen’s in 2003 (drawn, he says, by the university’s generous policies towards the intellectual property its professors develop and its well-rounded students who “are strong on the technical side but also understand the social and business aspects of what they do”), he spent his 2008 sabbatical at Switzerland’s École Polytechnique Fédérale de Lausanne.  “It’s a very entrepreneurial school,” he says. “And when I got back I decided I wanted to concentrate more on entrepreneurial projects.” To that end, he has developed a new entrepreneurial stream within electrical and computer engineering programs dubbed ECE innovation or ECEi. He is also an associate researcher with the China-Israel Centre for Entrepreneurship and Innovation at Changchun’s Jilin University. Yousefi cites Kim Woodhouse, dean of engineering and applied science, Michael Greenspan, his department head, and Greg Bavington, executive director of the Dunin-Deshpande Queen’s Innovation Centre, “as directly instrumental in fostering a new culture of innovation and entrepreneurship.”

Out for a meal with a medical resident friend one evening in 2012 he was shocked when she told him that a young mother and her twins had died in the hospital one night because a simple scheduling mistake meant that a needed specialist was not on duty. “I couldn’t believe what I was hearing. I was deeply saddened and could not get it out of my head for days.”

Talking to other health care professionals he knew, he learned that medical scheduling was in fact an incredibly complex task but usually done with very simple, and inappropriate, tools like spreadsheets and emails. “And communications between the scheduler and the team were very noisy and spotty, extremely rudimentary.” A chief resident of cardiology, for example, might spend an entire weekend trying to schedule his or her first, second and third-year residents. Add in trying to juggle sick days and holidays and other variables, and there were many possibilities for potentially fatal errors.

“Because I come from an algorithm background, I knew that these were the hardest problems to deal with in computer science. Difficult but not impossible. Engineers and scientists working in operations research and artificial intelligence expend a lot of energy studying schedulers. Here was a great chance to create a system that would harmonize doctors’ and other healthcare professionals’ work schedules.” He started working on it in 2013, and in 2014 he and his co-founder, Dr. Mohsen Omrani, a medical doctor and neuroscientist, incorporated Canarmony (as in Canadian Harmony -- there’s that idea again).

Yousefi’s solution is a cloud-based scheduling tool called MESH (which combines the initials of the four developers’ first names and says succinctly what the tool is intended to do). MESH, he says, “optimally meshes all the staff schedules seamlessly. It lets you schedule shifts for people you need at the push of a button. You identify whom you need, say so many E.R. nurses and so many residents and with what skills – and it knows that sometimes people wear more than one hat, and can take that into account.” MESH can even incorporate who wants to work with whom and what shifts they prefer. “Automatic, customizable, intelligent, and dynamic, MESH cuts through any shift problem like a knife,” Yousefi adds.

“When the schedule is done and approved by the manager,” says Yousefi, “it gets pushed along to everyone in the pool.” They can access it through iOS and Android mobile apps on their phones, tablets, or via any web browser on any computer. If anything happens along the way, because of sickness or an accident, everybody gets informed in real-time.

“The other thing MESH does is allow people to swap shifts really easily. Life does not happen on a schedule. Just swipe left or right on your phone to send swap requests and someone can take your shift.”

A self-described perfectionist, Yousefi and partners have taken their time developing MESH. Today the company is trialling the app with medical users, including Kingston General Hospital and Hotel Dieu here in town, and plans to launch a new version of the app featuring an “improved Canarmonizer” (as he terms the algorithm) and a “more user-friendly and attractive version of the interface.” Monetization comes next.

“What got us where we are has been the move to Queen’s Innovation Park,” says Yousefi. “We went through the application process back in the summer. How quickly things got done and how supportive the staff were -- that was an indication that we had done the right thing. We’ve received lots of help. There are so many examples. We’ve made connections through IRAP and OCE, we’ve had so many networking and learning opportunities in the last six months.”

“Not only has it been good for the company as a whole, but individually our people have also benefited,” says Yousefi. With a mission-focused startup-like Canarmony, “it is extra important to make sure the team is highly motivated and focused on the mission.” Thanks to Canarmony’s involvement in GrindSpaceXL (Innovation Park’s acceleration program for startups that offers them office and workspace as well as expert advice), “They understood a lot better what we were doing and why we were doing it. We also worked out where we were not doing things optimally. So I can probably say the amazing team at the Innovation Park harmonized Canarmony even further.”

MESH would be enough to keep most entrepreneurs busy. Not Yousefi. “I teach my students you want to be the sharpest knife – you do one thing and you do it the best. So I am seemingly violating that by launching a second product” called OPTT (for Online Psychotherapy Tool). Many people seek psychotherapy help, but because of geographic isolation, difficulties with time and personal schedules, cultural or language barriers or the stigma surrounding mental illness, they cannot readily get it. OPTT lets them access help over the web, connecting them with mental health professionals, and offering tests, cognitive behaviour therapies and exercises, all delivered with complete confidentiality. “OPTT’s unique value proposition is how it creates a clinic-in-the-cloud delivering the latest clinically proven methods of therapy through our proprietary modules,” he says. Still in its early stages, “We want to get hospitals and governments involved. It’s a challenging feat, but I am not here to do something easy.” Mental health is another one of his passions.

While on sabbatical, as well as putting in time researching 5Th generation wireless telecommunication systems (5G) at the University of California, Santa Cruz (UCSC), he is working with his PhD students at Queen’s on mass cloud-based data storage and transmission technologies for high-rate applications such as video. They have one recent US patent filed and one more under review by PARTEQ Innovations (Queen’s commercialization arm) also located at Innovation Park. Yousefi is also busy “growing a Canarmony subsidiary in the Bay Area, to be able to benefit from, and be a bridge to, the rich high-tech ecosystem around San Francisco.” If that weren’t enough, Dean Woodhouse has also appointed Yousefi faculty liaison to C100, a non-profit association of Canadian business leaders based in the San Francisco Bay Area dedicated to helping Canadian high-tech start-ups and encouraging Canada’s next generation of successful entrepreneurs and innovators.

“One thing I hear again and again from entrepreneurs and investors is that Canada is the place to be. Toronto, Ottawa – Kingston. They are it. Amazing talent, lower operational costs and many amazing talents who are there to help you succeed. Down here [in Bay Area], people are not going to offer you the kind of support we have received at Innovation Park, and are still receiving -- Canarmony has been approved to receive embedded management services, focused on business development and sales support, from PARTEQ Innovations.

“So kudos to Janice and the teams at Innovation Park. Deciding to move there has been the single most important decision we have made since Canarmony’s inception.”