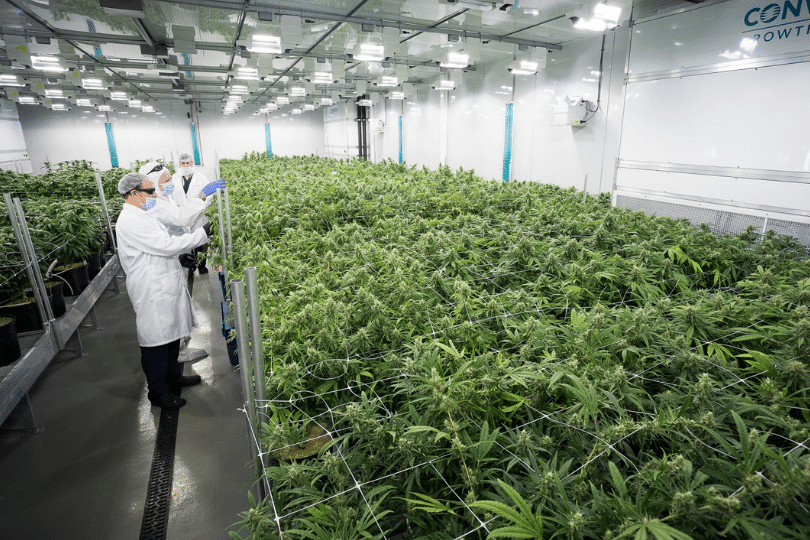 Ken Clement sought the best conditions to grow medical marihuana. On his quest to help grow his company, ABcann Medicinals, one of the groups that provided support was the Southeastern Ontario Angel Network (SOAN).

Plenty of evidence suggests that marihuana is effective in helping people manage pain, particularly chronic pain. The government of Canada recognized this need as far back as 2001 when it introduced the Marihuana Medical Access Regulations.

In 2009 Vancouver Island-based entrepreneur Ken Clement learned from Health Canada that the government was contemplating a major change in the regulations. It would grant licences to qualified producers to guarantee patients using medical marihuana, a safe and regulated source. Sensing a great opportunity (estimates put the potential market at $1.5 billion a year for medical marihuana) Clement vowed to win one of the first licences.

Given the faintly raffish aura that surrounds marihuana and its sale, Clement knew he would need to work hard to build credibility. In connection with that, he also understood that for marihuana to be accepted as medicine, the dosages and strengths had to be consistent. No sufferer wants a drug where the pain-relieving effects vary randomly from one dose to the next; no doctor would want to prescribe such a drug. Clement got busy creating partnerships with leaders in marihuana growing and research technology which took him to the Netherlands (current source of his seeds) and to a meeting with Professor Mike Dixon of the Controlled Environment Systems Research Facility at the University of Guelph. Dixon is a specialist in extraterrestrial farming – if we ever get to Mars, his research will help people grow food there. That kind of controlled environment was exactly what Clement had in mind to grow medical marihuana.

While still in the planning stages of his enterprise, Clement paid a visit to a small town in Ontario to visit relatives. Everyone he spoke with about his vision, including local civic leaders, responded enthusiastically and with offers of cooperation. Land prices were a steal compared to out west and it became apparent that rural Ontario, specifically Napanee, would become the future home for ABcann Medicinals.

His Kingston lawyer, Peter Tobias, soon connected Clement with John Molloy, who had just taken on responsibility as managing director for building the Southeastern Ontario Angel Network. SOAN is a regional angel network, covering from Trenton to Cornwall. SOAN currently has 100+ members, all with an interest, and the means, to invest in companies based in this region.  Molloy, who for many years had been the head of PARTEQ Innovations, Queen’s University’s arm for commercializing academic research, says “We have meetings every two or three months. It’s not that formal. It’s always a networking event, which includes a pitch session for 2-3 companies. If investors like what they see they can participate.” In 2016 members invested just over $8 million in regionally-based companies, and since its inception, members have invested over $15 million in total. SOAN members have invested more than $3 million thus far in ABcann.

From its modest beginnings with one founder/a few employees and the purchase of an empty warehouse at 126 Vanluven Rd, ABcann Medicinals has grown dramatically. Health Canada granted the company its first license in March 2014 and then additional licences to produce and sell on December 31, 2015. The company started selling directly to the public in June of 2016 and since then, growth in sales has been compounded by 30 percent a month.  “The company also has a very high customer retention rate,” says Molloy. To purchase their product, potential customers need a medical document from a physician. They can select their product from ABcann, or any other licensed producer, which then ships to the client directly.

Today, ABcann Medicinals’ indoor growing facility covers 14,500 square feet and employs fifty people. “We grow in an organic way and no product contains any pesticides,” says Molloy, who also serves as ABcann’s executive chairman. Temperature, humidity, the soil that the plants are grown in, every aspect of growing is tightly controlled, which allows for consistency from batch to batch. The approach has also had some unexpected benefits. “We expected some improvement in yield from controlling the plant growing conditions, but the extent of the yield improvement was a little staggering,” Molloy says. A consistent product is also a boon for researchers. “There’s been all sorts of anecdotal evidence and papers that marihuana works for different illnesses, but there have been no real controlled studies,” says Molloy. “You need a consistent product, in order to be able to do controlled clinical studies.”

With that in mind, Queen’s Industry Partnerships (QIP) has been working with the company since 2012. In October 2013 QIP held a networking event on campus to introduce Ken and his colleagues to Queen’s researchers working on pain reduction.  On June 25, 2015, before the firm had even been licenced, QIP helped host a lecture at the university by Raphael Mechoulam, the head of ABcann Medicinals’ Scientific Advisory Board. The appearance by the professor from the Hebrew University of Jerusalem, popularly known as “The Father of Marihuana,” generated considerable additional interest among Queen’s researchers. QIP has also put ABcann Medicinals in touch with local and regional suppliers and helped connect the firm with useful resources at Queen’s. ABcann Medicinals ended up sharing an employee with Queen’s Analytical Services Unit, thanks to one such introduction. The future should see many further opportunities for cooperation between Queen’s and ABcann Medicinals.

Work is already underway on adding new “bloom rooms” to the existing building as well as starting on its new facility in Napanee. The first phase of that will cover 70,000 square feet. By next year, Molloy says, ABcann expects to have 300 employees working in its Napanee plant. Looking down the road, the firm is planning to expand into the German and Australian markets and is investigating alternative delivery systems to deliver marihuana’s healing properties. Then there’s the real possibility that the government will legalize recreational use in the fairly near future. “It is projected that this market could be up to $8-10 billion a year,” says Molloy. Ultimately, the facility in Napanee could grow to cover one million square feet.

To prepare for this, ABcann Medicinals is hoping to be a public company by mid-April.  This move will give the company the funds it needs to grow. It will also, hopefully, allow early investors to realize a return from their investment at some point. The benefits will extend beyond SOAN’s members. “When you make a return -- when you make multiples of your investment -- you are much more inclined to make another investment.” For ABcann Medicinals, for SOAN, for Napanee and the region, marihuana is proving to be a win-win-win proposition.