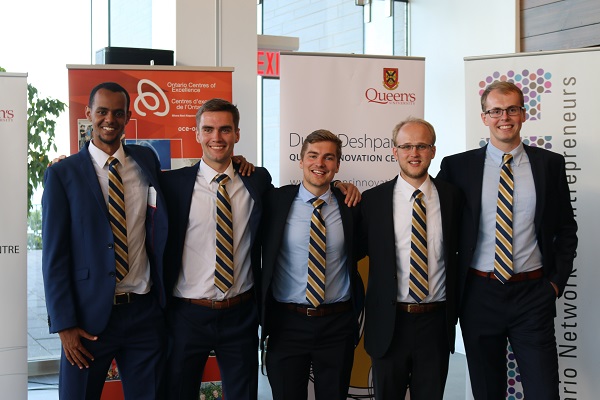 They travelled to the other side of the world to put their business plans to the test, and in the end the Spectra Plasmonics team came up victorious at the Lee Kuan Yew Global Business Plan Competition.

As part of their winnings, the team will receive $125,000 in cash and tens of thousands of dollars in services, prizes, including legal, corporate and marketing support.

The competition was hosted by Singapore Management University and the Queen’s team was up against 35 other teams flown in specially for the competition.

The Spectra Plasmonics team is made up of Tyler Whitney (Comm’17, Artsci’18), Ryan Picard (Sc’17), Malcom Eade (Artsci’18), and Christian Baldwin (Sci'19) and Yusuf Ahmed (Sc’18). This past summer they took part in the Dunin-Deshpande Summer Pitch Competition at Queen’s where they developed a chemical sensor that can be used for food safety, forensics, and law enforcement. With state-of-the-art capability, this device saves time and money in detecting trace levels of harmful compounds in complex mixtures.

“The win by Spectra Plasmonics is a testament to the character and effort put in by the team, to our strong academic programming and the leading edge research underway at Queen’s, and to the resources we have in place at Queen’s to support student entrepreneurs,” says Greg Bavington, Executive Director of the Dunin-Deshpande Queen’s Innovation Centre. “Congratulations to the entire Spectra Plasmonics team, and the Queen’s researchers behind the chemical detection technology, on their outstanding accomplishment.”

This venture demonstrates the success of the Foundry Program, developed together by the Office of Partnerships and Innovation and the Dunin-Deshpande Queen’s Innovation Centre to provide the opportunity for researchers who have intellectual property with commercial potential to work with students who are interested in pursuing entrepreneurship. Spectra Plasmonics is building a venture around some of the surface-enhanced Raman spectroscopy intellectual property that Hannah Dies, Aris Docoslis, Carlos Escobedo and Josh Raveendran - all of the Chemical Engineering department - have been developing.