Rillea Technologies: Chemical Safety in the Palm of Your Hand 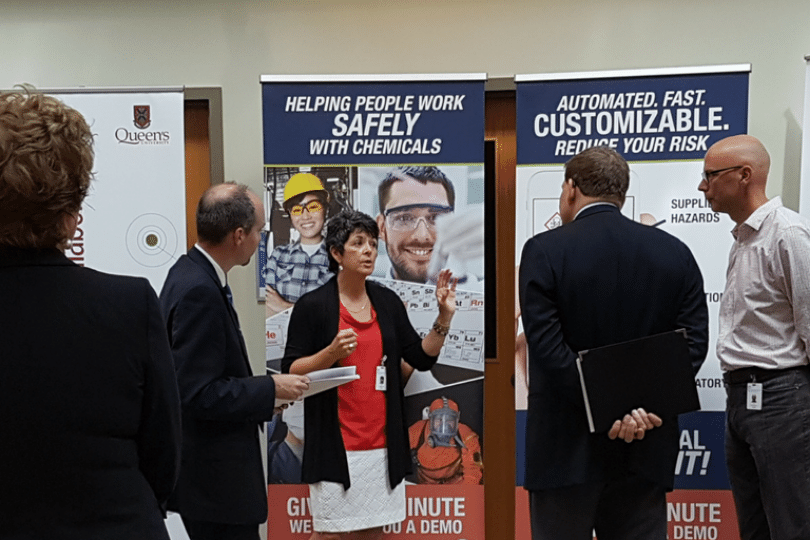 Lisa Hallsworth can remember the incident that inspired her to create Rillea. Back in 2015, in her previous job as a consulting engineer, she was giving the Kingston Fire Department a tour of a site where she had been advising the company on the storage and use of the chemicals they needed in manufacturing.

“It became obvious that they [the Fire Department] are constantly being called into situations where they have no idea of the hazards they may face,” Lisa said. She began to wonder if she could create a product that would help firefighters. It would have to be easy to use - and fast.

So pervasive are chemicals -- even a dentist’s office can contain more than one hundred different substances -- that governments and manufacturers have developed what are known as Safety Data Sheets, printed explanations listing the properties and hazards of chemicals.

“Fire chiefs can request the Safety Data Sheets from every business in their area,” said Lisa. Using that data, Lisa thought she could create an easy-to-access database that listed the data firefighters would need in a straightforward way. Entering a burning building, for example, they could be aware of exactly what hazards they were about to face.

So she had an idea – but really nothing more. The next steps were a challenge. Looking for help, she met at Innovation Park with Jim Banting and Angela Lyon, from then-PARTEQ Innovations (now the Queen’s Office of Partnerships and Innovation) in March 2016. Her hope was to find advisors to help her turn her idea into reality.

“As a woman looking to start up a business in tech, it can be difficult to find support, and I was really pleased that they said ‘Yes.’” Lisa said. Jim and Angela helped Lisa to understand her options regarding intellectual property, introduced her to Rick Boswell, a Queen’s expert in chemical management systems, and encouraged her to apply to a new pilot program at Innovation Park called DiscoverXL, which is aimed at entrepreneurs with ideas and concepts.

“It was basically two workshops,” said Lisa. “They really pushed the idea of customer discovery – who are they, what do they do, and what are they willing to pay for?”

Lisa’s husband, Rob Hallsworth (a veteran of many years in chemical-related industries), joined her for the workshops, and it was at this point that they experienced what they regard as their “pivot” – the realization that the customers for their product were the organizations using the chemicals, not fire departments.

There are grim statistics that back that decision to pivot. Worldwide, more than two million people die from work-related causes each year. Of these deaths, 87% are due to work-related disease, not accidents involving machinery and vehicles as one might expect. A modern workplace can contain a wealth of environmental hazards that workers may be only dimly aware of. The effects of these chemicals can be insidious, and long-term; they may not show up for years, even decades, after exposure.

While there are the Safety Data Sheets, listing the properties and hazards of chemicals, they are, frankly, exhausting. Ten to twenty pages in length, a conscientious employee working in a company that uses 100 different chemicals would be faced with wading through a mountain of prose potentially 2,000 pages long!

“That,” said Rob Hallsworth, “would be twice the length of War and Peace.”

Most people tend to pick and choose what to pay attention to instead. Not sure whether gloves are suggested? It’s hard to find out from the Safety Data Sheets, so maybe they can skip that. Worse, faced with ploughing through pages and pages of safety warnings and instructions, most workers ignore the Safety Data Sheets altogether.

That’s where Rillea comes in. Their product, SDS RiskAssist™, is a customizable, web-based application. A company using it enters all the Safety Data Sheets that relate to the chemicals they use in their business. The software extracts the information about critical hazards and also allows the employer to add company-specific instructions. When their employees need to access this chemical handling information, they don’t need to go searching for a binder somewhere obscure. It is available in company-specific one-page summaries on their phones or computers. The page they get highlights the hazards of the chemical and the precautions that the company wants its workers to take, removing ambiguity for the individual. In the long run, their app may save as many lives as a new respirator or improved safety clothing.

“We had a product,” said Lisa. “But a product is not a business. GrindSpaceXL was all about if you want to turn this product into a business, this is how you do it.”

While in the program they were working simultaneously on developing their software application.

“It was unbelievably useful,” she said. “Governance, customer validation, intellectual property, sales and marketing. We were lucky we learned it so early in the process of creating Rillea.”

Recognized as the entrepreneurs who most advanced their business model in the program, Rillea was awarded a week-long course in the Queen’s University leadership program.

“It was really valuable,” Lisa said. “I got a personal coach, and you do an extensive amount of personality testing. It turned out I did have the kinds of traits that are required to run a business.”

A year later, Rillea Technologies is still very much a work in progress, but it is beginning to build momentum and attract customers. After graduating from GrindSpaceXL, they began the beta testing of their product in January 2017. By August, they were able to release a finished version of SDS RiskAssist™. GreenCentre Canada, the centre of excellence for commercialization of research in green chemistry, located at Innovation Park, was Rillea’s first customer. SDS RiskAssist™ has been pre-qualified for testing by the Government of Canada through the Build in Canada Innovation Program. Other users today include Queen’s University’s Department of Biomedical and Molecular Sciences, Loyalist College, the County of Lennox and Addington, the city of Belleville, Research Casting International, GH Manufacturing, TF4Safety, The Medical Centre and most recently, the City of Quinte West. SDS RiskAssist™ has also been nominated for a Readers’ Choice Award by Canadian Occupational Safety Magazine.

In addition to their software, Rob and Lisa offer customers their expertise, performing chemical audits and helping customers understand the risk assessment process. Many companies are actually unaware of the hazards of the chemicals they use but make strong decisions when they learn about them.

“I am constantly going back to the things we learned in GrindSpaceXL,” Lisa said.

“And the support we got didn’t end when the accelerator program finished.”

“We still have access to office space here, and we continue to talk with and receive support, including mentoring, introductions, and trade show opportunities, from Jim, Rick, Janice Mady, Ed Thomas, David Hyndman, and several others located at Innovation Park,” added Rob.

As winners of Wise 50 Over 50 Awards, for Canadians over the age of 50 who start businesses, they got connected with Innovation Guelph, which led to an advisory relationship with, Bill Scott, a product management/operations mentor and career solutions consultant. They also gained introductions to various safety consultants and manufacturers in the western part of Ontario.

As for where Rillea Technologies goes next, Rob and Lisa are keeping an open mind.

One possibility could be to seek partnerships while another could be expansion. Other experts in the chemical safety field are already using their software to serve their clients and this could expand even further.

“The software was designed to go global,” Rob said. “It’s easy to translate into different languages. And with different regulations, we know what to do there. The United Nations’ Globally Harmonized System of Classification and Labelling of Chemicals, which is the basis for the Safety Data Sheets, is in use in 72 countries, so there is a lot of standardization globally. So that market is there.”

“There are a lot of opportunities,” added Lisa. “We just need to be open and evolve with them.”