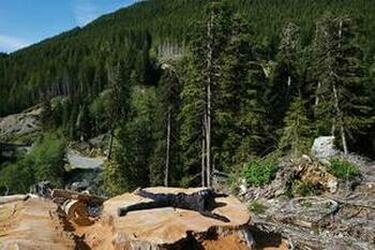 Camped in a cluster of tents and vehicles at various blockades along a series of remote roads on British Columbia’s Vancouver Island, land defenders have been protecting old-growth forests around Fairy Creek since August 2020.

The activists were asked to leave the area on April 1, 2021, after British Columbia Supreme Court Justice Frits Verhoeven approved an injunction filed by Teal-Jones Group. Enforcement began nearly seven weeks later. Months of police tactics followed, and by August 2021 the

Fairy Creek Blockade had become the largest act of civil disobedience in Canadian history. Over 1,200 activists have been arrested there since May 2021.

Jen Osborne is a Canadian photographer whose work has been published and exhibited internationally. She has worked with Maclean’s, the Globe and Mail, Stern, the Sunday Times, GQ, Mother Jones, Vice, Esquire, Vanity Fair Italy, and the New York Times, among other publications.