(and Other Names for Trauma) 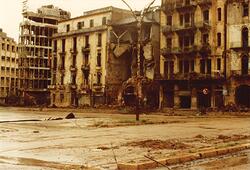 Etienne has already escaped to his room, where he spends most of his time since the American embassy bombing last month. He and I were on the adjacent campus when the bomb detonated, killing 63 people, including the entire CIA staff, in a blast that was felt all the way to Cyprus.

I was in the school library next door when the lights went out. The building shook; the windows shattered, and a noise louder than any I’d ever heard burst against my eardrums. Etienne was on the embassy grounds. He saw cars wrapped around telephone poles, mutilated bodies …

Tanya Bellehumeur-Allatt’s work has been published in Best Canadian Essays 2019 and Best Canadian Essays 2015. Her stories, poems, and articles have appeared in numerous periodicals. She has been nominated for a National Magazine Award as well as a Western Magazine Award. A poetry collection, Chaos Theories of Goodness, is forthcoming with Shoreline Press. Her memoir, Peacekeeper’s Daughter, has just been published by Thistledown Press and has been nominated for the Quebec Writers’ Federation Mavis Gallant Prize for Nonfiction.