The Whiner in the Diner 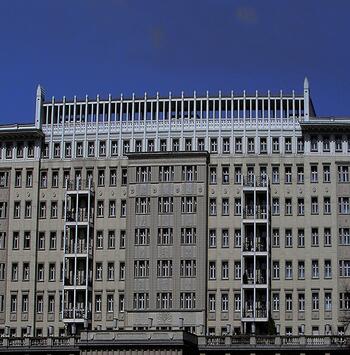 We blathered for three or four cups before I mentioned, as if quite randomly, Sophie Klomp. Unnervingly Trollop hunched closer to me, and told of how Sophie had previously been married to a Herr Klomp, who’d seemingly blown in on the wind. One sunny summer morning back in the mid-1980s, he’d been lying fast asleep in the doorway of Sophie’s flat. Black leather jacket, dark beard, old-fashioned canvas carryall, no shoes. She herself had been the first to see him and rang the doorbell to get Sophie, who’d come to the door all sleepy. Between them they’d given him a “right good flannelling down” in the flat (the turn of phrase allowed me to hazard a guess at where Frau Trollop hailed from – probably today’s Saxony-Anhalt) …

Kathrin Schmidt is an award-winning poet and novelist. She was born in the German Democratic Republic, and her work has often focused on the unjust social situation of East Germans during and since Germany’s reunification. Her 2009 novel You’re not dying, translated into English by Christina Les (Naked Eye, 2021), won the German Book Prize and has appeared in 13 languages. Her short story collection It’s over. Don’t go there. has just been released in English.

After the UK’s Brexit vote, poet and writer Sue Vickerman decided to reach out to Europe by turning to the translation of poetry and literary fiction. Being northern English, she empathized with Kathrin Schmidt, who similarly hails from a region where people feel “left behind” and where right-wing populism is on the rise. Her translations include Twenty Poems by Kathrin Schmidt (Arc Publications, 2020) and Schmidt’s story collection It’s over. Don’t go there. (Naked Eye, 2021).

This story is excerpted from Kathrin Schmidt’s collection It’s over. Don’t go there. (originally published as Finito. Schwamm Drüber. by Kiepenheuer & Witsch in 2011), translated by Sue Vickerman.