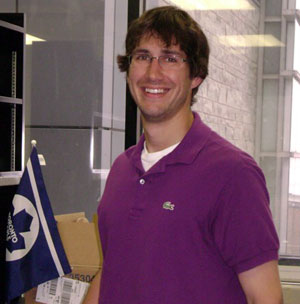 When Doug Richardson was an undergrad trying to decide what to do with his life, he looked for a sign that would point him in the right direction. When that sign came, and it was anything but subtle.

Richardson  had been studying in the Life Sciences department at Queen's. "I didn't know what I wanted to do," he recalls. "I was leaning toward research, but I didn't have a clear idea beyond that. It was a point where I could have probably gone into any branch of Life Sciences and it was intimidating. I had too many options in front of me." In his second year, his path suddenly became clear.

"I was diagnosed with testicular cancer," he recalls. "I saw that as a sign."

That diagnosis led him to join the Department of Pathology & Molecular Medicine and dedicate his life to cancer research. "It came from a desire to help people who are going through the things I went through," he explains.

Richardson enjoyed his time at Queen's. The best part of the experience, he says, was the collegial atmosphere. "I love that we're not in competition with the other labs," he says. "At bigger schools, you hear stories about the labs being in competition with each other. It's not like that here. It's a great environment to work in. I had a lot of fun and made good friends."

Now that the experience is over, Richardson has just begun the next phase of his career, a two- year post-doctoral fellowship in cell biology at the prestigious Max Planck Institute in Germany. "I just picked a place where I wanted to live that had labs that I wanted to work in," he says. "Canadian PhDs are highly regarded around the world. I didn't believe that at first, but it turned out to be true."

Once the fellowship is over, Richardson hopes to return to Canada in an academic position. He's looking forward to a bright future in the field, now that his cancer has been successfully treated. "I'm not worried about that anymore," he says. "Right now, my plan is just to enjoy Germany and enjoy life."