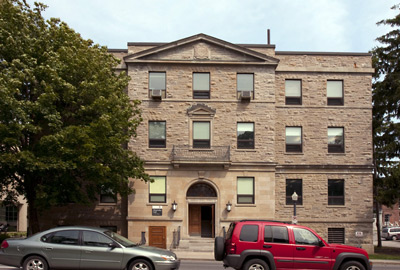 Completed in 1957, this neo-Georgian building at the corner of Arch and Deacon Streets was the first building on campus dedicated to the study of the science of physiology and initially was called the Physiology Building.

A plaque erected inside the entrance recognizes the generous gift from local businessman Harry Abramsky and his wife Ethel who donated the funds for its construction. In 1974, on the recommendation of Principal Ronald Watts, the building was renamed in their honour.

The Physiology Department has since moved, and the building now houses a variety of health-related academic units. It is designed in the neo-Georgian style and clad in Queenston limestone.

In 2011, Queen's School of Medicine incorporated the south exterior wall of Abramsky Hall.