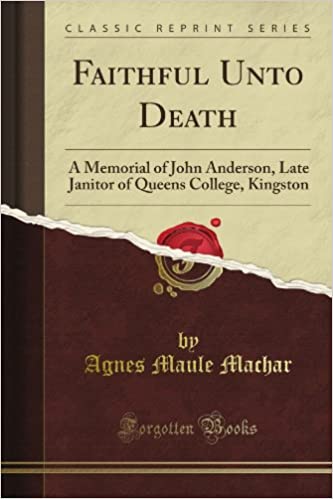 Anderson was a Queen's janitor from 1851 to 1859 and the subject of the first book ever written about a Queen's employee: Faithful Unto Death (see Books about Queen's).

Published in 1859, the book is a religious tract, a commemoration of Anderson as a model Christian "whose life, though humble indeed to the eye of the world, was yet truly great in the highest sense."

Its author was Agnes Maule Machar, 22, daughter of the Rev John Machar who served as Queen's Principal from 1846 to 1853. Later, Machar became a minor literary celebrity in Canada for her popular patriotic poems and novels.

The book's interest for modern readers lies in a series of Anderson's personal letters, which she reprints. They provide fascinating glimpses of the routines and hazards of life at Queen's in the mid-19th century, and from a perspective rare in an age that left few records of anything but elite or institutional history.

Anderson writes about the daily drudgery of cleaning the college, "the tricks and mischief" of the students, the sometimes fatal epidemics that swept through the university, and the dreariness of living all alone in Summerhill which was then an isolated villa at the edge of town.

Copies of the book are held by the W.D. Jordan Rare Books and Special Collections.

Anderson is buried in the Cataraqui Cemetery.