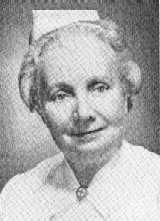 Louise Dunbar Acton was born in England and was certified as a teacher before coming to Canada.

She trained at St. Luke's Hospital in Ottawa and in 1920 was appointed Night Supervisor. After two years in that position, she was made Day Supervisor and Assistant Instructress.

In 1924, the hospital closed and Louise moved to Kingston to take the position of Chief Instructress of Nurses at Kingston General Hospital. She held that position until 1942, when she was made Superintendent of Nurses (the position is now known as Director of Nursing).

Louise D. Acton retired in 1958 and moved to Brockville to live with her sisters.

Her many years of devoted service earned her the respect and affection of all who knew her at the hospital. In addition, she was very involved in the community and served as President of the Registered Nurses' Association of Ontario for District No. 7, as well as second Vice-President of the Canadian Arthritis and Rheumatism Society and Honorary President of the K.G.H. Nurses' Alumnae Association.

The Louise D. Acton Building is named in her honour.