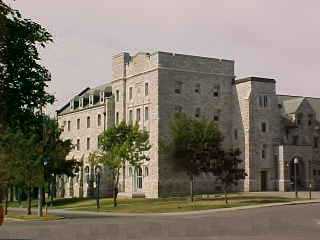 Built in 1923-25, Ban Righ Hall is a women's residence located at the corner of University Avenue and Queen's Crescent. It is the oldest of the University's residences still standing and owned by the university, and the first specifically built to be a residence.

Its opening in 1925 represented the culmination of about 15 years of work by the volunteer members of the Alumnae Association, the association of female Queen's graduates, who entirely planned Ban Righ Hall and raised $80,000 - more than half of the money needed for the building - through bit-by-bit fundraising in the form of teas, bakesales, bridge parties, and small donations.

A reluctant Board of Trustees provided the rest of the money; some Board members were worried that no women would want to live in Ban Righ because it was located on what was then the little-travelled, extreme southwest edge of campus, cut off from the focus of student life to the north and east.

In exchange for their contribution, the Alumnae fought for and won an ongoing share in the administration and supervision of the residence and later women's residences at Queen's, a role they kept until the early 1970s.

Ban Righ was officially opened in October of 1925 by the Viscountess Byng of Vimy, the wife of the Governor General. Adelaide Hall was added to it in 1951-2 and an expanded dining hall was added in 1967-68. The residence's dining hall was renovated in 1996 to accommodate growing numbers of students in residences, as well as to modernize food services at the University.

The term "ban righ" is Gaelic for "wife of the King" - or, in other words, "Queen." The name was suggested by Professor Macgillivray when the original name chosen by the alumnae, "Banrighinn Hall," was called into question because of the possibility of it being confused with a Mr. Brannigan, who was the owner of a local theatre.