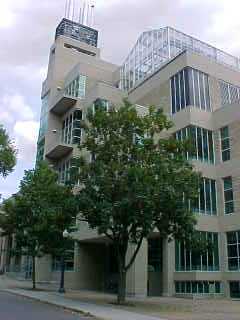 Officially opened on November 28, 1997, the BioSciences Complex houses the Department of Biology, PARTEQ, and various other science and technology-oriented departments.

The complex features a large atrium with student study space and art displays, large lecture halls used by many different departments, and the Queen's Phytotron, featuring a number of greenhouses.

The $52 million BioSciences Complex is equipped with some of Canada's most sophisticated facilities for research in biotechnology and molecular science. Bringing together researchers from many different faculties and departments, the complex facilitates research collaboration and has strengthened the role of Queen's as a leader in scientific scholarship.

The BioSciences Complex incorporates the old Biology Building, Earl Hall, which was built between 1963 and 1966. The Queenston limestone that encases Earl Hall can still be seen as part of the east wall of the BioSciences atrium.