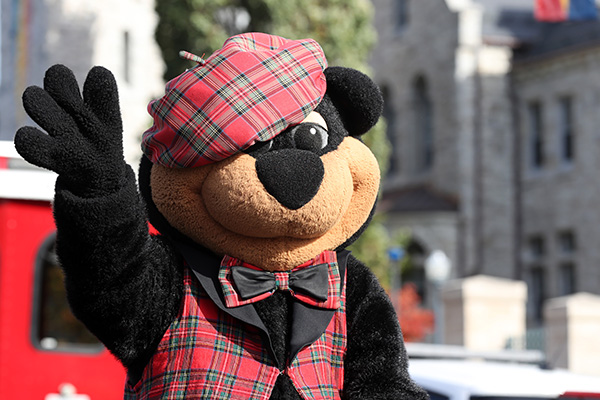 When the Gaels hit the gridiron, they have bands, cheerleaders and a big fuzzy mascot, Boo Hoo the bear, cheering them on to victory. While nowadays there’s a student inside the Boo Hoo costume, in the 1920s and for decades later, Queen’s had a live bear.  The original Boo Hoo was a real bear cub purchased by students in 1922.

The 1920s saw Queen’s rack up major football victories, including three Grey Cup wins in a row. Proud of their success, students were eager to project the team’s strength and ferocity. After an informal student club bought a bear cub in northern Ontario, they began bringing it out to football games. With a leash around its neck, the bear was walked up and down the sidelines while the audience cheered and yelled. It soon became the team’s mascot. Kingston-based composer Oscar F. Telgmann even composed a march for the piano in honour of the bear, called "The Mascot, Boo Hoo's March," which was popular for some years. After the first bear died, students found another bear to fill the role and dubbed it Queen Boo Hoo. The name Boo Hoo stuck, and was given to that bear’s replacements too.

Taken from the wild and kept as a mascot, there was little effort to provide Boo Hoo with proper care. Boo Hoo the Bear was kept confined to a shed outside the Jock Harty Arena. Students often fed Boo Hoo whatever they thought a bear would like. They gave it apples and honey, and sometimes a bar of chocolate. 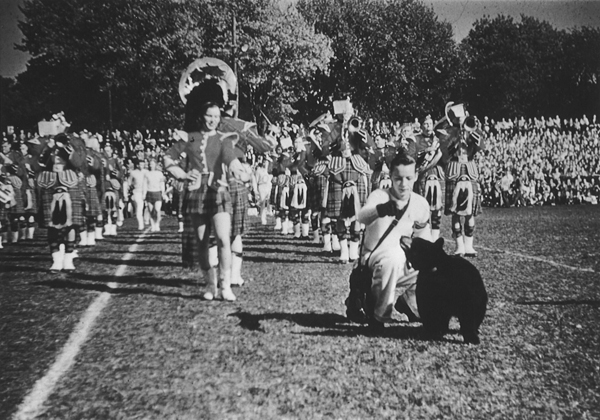 Boo Hoo was sometimes allowed to roam around campus. Students in the 1940s recounted the surprising sight of a bear, confused and alone, sitting on ledges and windowsills.

The tradition of live bears continued into the 1950s, with Ontario’s Department of Lands and Forests providing the animals. Over the 30 years that the tradition persisted, five bears faced a life as Queen’s mascot. As times changed, concerns arose. Keeping a live bear as a mascot was recognized as a dated and inhumane tradition, and so the practice was stopped.

In 1980, Boo Hoo reappeared, but this time as a human in a bear suit. Dressed in a tartan vest, bowtie and tam, the modern Boo Hoo now helps Queen’s Bands cheer on the Gaels as they compete at home and across Canada.