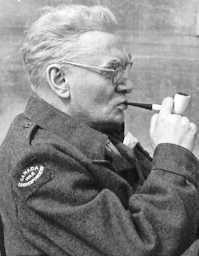 Queen's 10th and longest-serving rector (1947-1966), Leonard Brockington was also the first chair of the CBC and a national figure as an orator and public commenter.

Brockington was born in Cardiff, Wales, and was the son of an English schoolmaster. He graduated with honors in Greek and Latin before immigrating to Canada in 1912, when he became the editor of a newspaper in Edmonton. He moved to Calgary in 1915 and, for several years, worked as a clerk during the day while studying law at night.

He became a lawyer in 1919, scoring record marks on all of his law exams. He soon joined the Calgary law firm of James Lougheed and R. B. Bennett, and then became city solicitor, a post he held for 20 years. He developed a reputation as an orator and in 1935 left for Winnipeg, where he became general counsel for the North West Grain Dealers Association.

In 1936, the Canadian Broadcasting Corporation appointed Leonard Brockington the first Chairman of their Board of Governors because of his reputation for an interest in the arts. As chair of the CBC, he oversaw the establishment of a network of transmitters to bring the CBC to everyone in Canada. He was also a strong believer in the concept of a non-sponsored, non-partisan national station.

Brockington held the position at CBC for three years, leaving in 1939 to become a special advisor to Mackenzie King's war cabinet. Two years later he returned to England and served as advisor to the British Ministry of Information. During WWII, Canadians came to know his voice well through his radio reports on the progress of the war.

A truly multi-talented man, Leonard Brockington proved his ability as a labour negotiator after the war. He also became president of Odeon Theatres.

His time as Queen's Rector was marked by his devotion to Queen's. He first came to Queen's in 1947 to deliver the annual Alma Mater Society lecture. He made such an impression on the students that within the year they appealed to him to become the Rector. At that time, the Rectorship was primarily a ceremonial post and involved little more than giving one or two speeches throughout the three-year term.

As Rector, Brockington used the position in a way no one else ever had, thereby completely redefining how the position was perceived. He attended convocations and other events and became actively involved in the issues of the day such as the proposed development of the lower campus, which the students protested. Leonard Brockington also used his considerable influence on his illustrious friends - people like Nicholas Monserrat, Yousuf Karsh, John Buchan, Grattan O'Leary, and Lord Tweedsmuir (Governor-General of Canada from 1935-1940) - to encourage donations of money and artifacts to Queen's and to attract exceptional speakers for guest lectures.

Brockington remained Rector until his death in 1966, and the effect he had on the position was revealed by the fact that no one could imagine going back to the traditional style of Rector. As a result, the students demanded that they be the ones to hold the position from then on. Leonard Brockington was always much loved by the students and had taught them the value of having a voice on the Board of Trustees. The first student Rector, R. Alan Broadbent, was elected a year later.