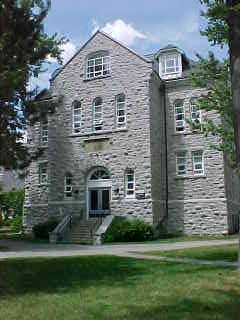 Built in 1890, Carruthers Hall is one of the oldest buildings on campus: only Summerhill, Theological Hall, and the Old Medical Building are older.

It was the first building at Queen's built for strictly scientific purposes and the money for it was raised as part of the famous Jubilee Campaign, with more than half of it contributed by John Carruthers, a Kingston businessman who helped Principal Grant in his efforts to convince the Board of Trustees to ask the government to establish the School of Mining and Agriculture.

The building was designed by Professors Nathan Fellowes Dupuis and William Lawton Goodwin after they spent some time visiting American universities for inspiration. Due to budget constraints, when the building opened in 1891 as the new science hall, it wasn't fully furnished.

In 1893, Carruthers Hall was occupied by the Ontario School of Mining and Agriculture, which later became the Faculty of Engineering and Applied Science.

Carruthers Hall was the first building in Kingston to be fitted with electric lighting, which was installed by Professor Goodwin. The hall was officially opened by Chancellor Sir Sandford Fleming on October 16, 1891.

It now holds the CFRC Radio Station, the Gordon Vogt Studio Theatre, the Department of Public Health Sciences, and a variety of offices.