CFRC is the University's own radio station, broadcasting a variety of alternative, non-commercial programming to Queen's, Kingston, and the surrounding area at FM 101.9. The station was the first radio broadcaster in Kingston and is one of the oldest in the country. 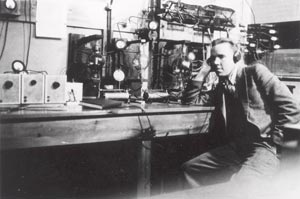 Its forerunner, an experimental station called 9BT run by the Queen's Wireless Club, came on the air on October 7, 1922 with a summary of a football game between Queen's and the Hamilton Rowing Club. The station began broadcasting under its current call letters about a year later with the play-by-play of a Queen's-McGill game.

The letters CFRC are said to stand for "Canada's Famous Rugby Champions," a reference to Queen's Grey Cup-winning teams of the early 1920s (football was then called rugby or rugby-football). The station was a CBC affiliate between 1936 and 1942 and during that time served as Kingston's main electronic source of national and international news.

In 1957, Margaret Angus was appointed by the university as the first full-time, paid Director of Radio, and the CFRC Radio Club was established. The Radio Club continues today as a group of volunteers from Queen's and Kingston who participate in the station's programming and operations.

In 1959, Angus oversaw the move of CFRC from its studios in Fleming Hall to its current home in Carruthers Hall. In 2003, Queen's transferred responsibility for the oversight of CFRC to the Alma Mater Society. The station airs a wide variety of alternative music and spoken word programming and continues to organize live broadcasts from Queen's Gaels games at home and away.

The station has broadcast in stereo since 1989. Among the station's most venerated alumni are actor Lorne Greene, CBC Radio's Shelagh Rogers, and Globe and Mail columnist Jeffrey Simpson.

The station's history is told in the book In the Shadow of the Shield by Arthur Zimmerman, Program Director of CFRC from 1984 to 1988.