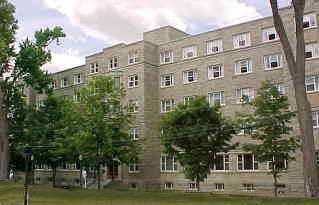 Chown Hall, completed in 1960, was the third residence to be built on campus.

Its completion brought the total available residence places for women up to 435, which, in 1960, was about half the total number of women students at Queen's. It became a mixed gender environment in 2011.

Queen's had some difficulty purchasing the land for Chown Hall due to the reluctance of various parties to sell their land, or at least to sell it at a price which Queen's considered reasonable.

The many residences built during this period were part of the vision of Principal Mackintosh, who wanted a special place for Queen's as close-knit, residential university.

The building is named after May Chown (BA 1911), treasurer for many years of the Ban Righ Board and daughter of Queen's long-time treasurer, G.Y. Chown.