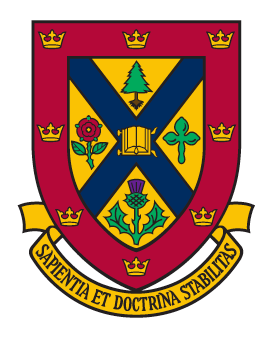 "Or, on a saltire Azure between in chief a fir Tree eradicated, in base a thistle stalked and leaved and in fess a red rose barbed, seeded, stalked and leaved all Proper and a trefoil Vert, an open book of the First, a bordure Gules charged with eight ancient crowns Gold."

Originally devised by amateur heralds when the university was founded, Queen's coat of arms is based on that of Edinburgh University, the institution after which Queen's was modelled.

It consists of a gold shield with red edges divided into four triangular compartments by a blue, diagonal St. Andrew's cross.

The cross of St. Andrew, with an open book at the junction to show that the arms belong to a place of learning, represents the original bond between Queen's and Scottish universities (St. Andrew is the patron saint of Scotland).

In each of the four compartments made by the arms of the cross is an emblem of the university's Canadian and British origins:

The red colour of the border is a mark of cadency, indicating that Queen's is younger than Edinburgh University. The border is decorated with eight gold crowns, symbolic of Queen Victoria and the university's Royal Charter.

The whole shield is underlined by a banner with Queen's motto: Sapienta et Doctrina Stabilitas (Wisdom and knowledge shall be the stability of thy times).

The coat of arms appeared as early as 1850, but was not registered with the College of Arms in England until more than a century later in 1953. The registration cost $600 and there is a story that the open crowns on the border were chosen in Queen's traditional, cost-conscious manner because they were $50 cheaper than closed crowns.

The coat of arms was registered with the Scottish equivalent of the College of Arms, the Lord Lyon King of Arms, in 1981 and with the Canadian Heraldic Authority during Queen's Sesquicentennial Celebrations in 1991, at a ceremony presided over by Governor General Ramon Hnatyshyn.

In 2000, the Coat of Arms was made part of Queen's Visual Identity.

The coat of arms is now a registered trademark of Queen's University. Prior to use in any manner, permission must be obtained from the Trademark Use Review Board. The Coat of Arms is reserved for official university use only and may not be reproduced in any form or under any circumstances without special permission from the Board.