"Connell" is one of the most prominent names in the history of Queen's Faculty of Health Sciences, thanks, oddly, to two unrelated families. Between about 1900 and 1970, these two families produced one Dean of Medicine, two heads of the Department of Medicine, and one of the faculty's most distinguished researchers.

The first Connell associated with Queen's was James Cameron Connell (1863-1947). Born in Ayr, Ontario, he graduated from the university's medical school in 1888 and in 1892 was appointed a professor in the department of Ear, Eye, Nose, and Throat (now two departments, ophthalmology and otolaryngology). A skilled surgeon and a respected teacher, he was appointed Dean of Medicine in 1903.

He served in the post until 1929, guiding the faculty through the difficulties of the First World War and a period of rapid growth. He was one of Queen's senior figures when he retired from medicine in 1929 and served as the University's acting principal in 1930.

His son, Hendry Connell, followed in his footsteps as an ear, eye, nose, and throat specialist at Queen's. His real love, however, was medical research and he made his name in the 1930s with research into a widely-publicized enzyme compound called Ensol, which was for some time thought to be a promising treatment for cancer.

The second family of Connells arrived at Queen's shortly after the first. Walter Thomas Connell (1873-1964) was born in Spencerville, Ontario and graduated from Queen's Medical School in 1894. He was appointed the following year as a professor of Pathology and Bacteriology at the university (see Microbiology and Immunology, Department of).

During the First World War, Connell served as senior physician with Queen's military hospital in Egypt (see Wartime at Queen's). He became head of the faculty's Department of Medicine after the war and served in the post until 1941 when his son, Dr. Walter Ford Connell, took over. He retired from the faculty as its most senior member in 1950 after a total of 55 years of teaching.

His son, generally known by his middle name "Ford" to avoid confusion, was born in 1906 and graduated with a medical degree from Queen's in 1929. After a period of study in England, he returned to Queen's in 1933 as a professor in the Department of Medicine, where he rapidly developed a reputation as one of Canada's foremost specialists in heart disease.

He led the Department from 1941 until his retirement in 1968. The name Connell lives on at Queen's in the Walter T. Connell Wing of Kingston General Hospital, established in 1960, and numerous other facilities and lectures that bear the name. 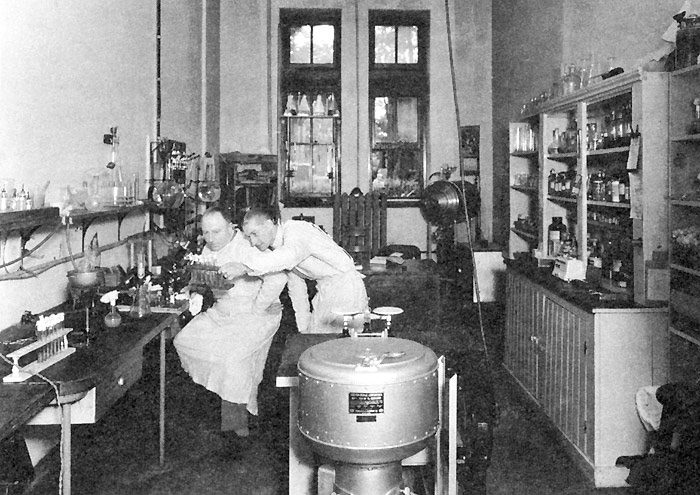 H.C. Connell and Bert Holsgrove in a laboratory in Ontario Hall in 1935.