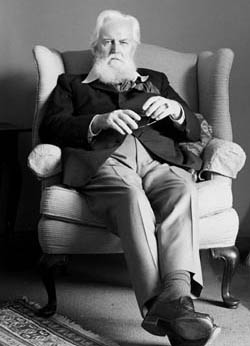 The distinguished Canadian novelist Robertson Davies, a native of Thamesville, Ontario, attended Queen's between 1932 and 1935 but was unable to graduate.

He was active in university theatrics and at the Queen's Journal, where he became literary editor in his final year. Despite his success in the humanities, he failed to obtain the math credits which were then a prerequisite for graduation; he transferred to Oxford, which had no such requirement, and received his BLit from there in 1938.

After a career as a minor stage actor and theatrical assistant in England, he returned to work as a journalist in Canada, serving as editor and later publisher of the Peterborough Examiner (1940-1965). At the same time, he began his prolific career as a novelist, playwright and critic. Later he lectured in literature at the University of Toronto.

In his first three novels, later known as the Salterton Trilogy (Tempest Tost (1951), Leaven of Malice (1954), and A Mixture of Frailties (1958)), he drew on his experiences in Kingston and at Queen's, setting the novels in a fictional town, "Salterton," modelled on Kingston, and giving a prominent place to "Waverly University," modelled on Queen's. Among his best-known novels since then are Fifth Business (1970), The Manticore (1972), The Rebel Angels (1981), What's Bred in the Bone (1987), Murther and Walking Spirits (1991), and The Cunning Man (1994).

In 2010, the W.D. Jordan Special Collections and Music Library became the home of Robertson Davies' personal book collection. It is comprised of over 5000 volumes, as well as theatre prints and ephemera. Many of the volumes are annotated with handwritten notes inside. There are also many signed or first editions among the collection.