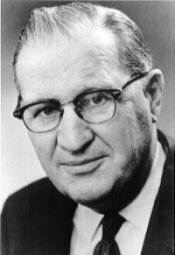 John James Deutsch was Queen's 14th Principal (1968-1974) and a Queen's graduate. Before returning to his alma mater, he spent more than 20 years away from Queen's, rising to prominence in the federal public service before returning to the University.

Born the eldest of 17 children on a farm near Quinton, Saskatchewan, Deutsch was the only one of his family to receive a formal education. He was educated at a Regina high school and when he entered Queen's at the age of 21 he was already an experienced high school teacher. While in Kingston, he supported himself by teaching at Regiopolis College. Despite holding down this job, he managed to finish his Bachelor of Commerce in only two years, graduating in 1935.

Dr. Deutsch did graduate work in 1936 but then decided to take up a career in public service.

Everywhere he went, Deutsch was known for his practicality and his friendliness.

Dr. Deutsch re-entered the academic world when he became the head of the Department of Economics at the University of British Columbia, a position which he held for three years.

In 1959, Principal W.A. Mackintosh recruited Deutsch to Queen's to overhaul the university's financial management and administration, and so he became Vice-Principal of Administration and Professor of Economics.

He left Queen's briefly in 1963 to serve as the first Chair of the Economic Council of Canada, but returned in 1967 to take over as Principal, a position he held until 1974.

As Principal, Deutsch saw it as one of his most urgent tasks to maintain Queen's traditional intimacy in the face of extreme pressures to expand. He put a brake on enrollment when it reached 10,000, a move he deemed crucial in helping Queen's retain its sense of community. He then dedicated his efforts to improving the quality of education for those already at Queen's rather than making room for more students. His incisiveness, personal rapport with students, and willing expansion of students' role in the university's governance also steered Queen's clear of much of the student unrest that racked other universities in the period.

A companion of the Order of Canada, Deutsch received 17 honorary degrees, the hoods of which are now displayed in a work of art by Helen Frances Gregor. This piece can be found on the wall outside the AMS offices in the student life centre which was named for him, the John Deutsch University Centre.

He died in Kingston and is buried in the Cataraqui Cemetery. His personal papers are held at Queen's Archives.