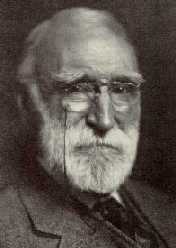 James Douglas, Queen's third Chancellor (1915-1918), led quite a varied life as a Presbyterian minister, a metallurgist, and industrialist, and a historian. He was born in Quebec City and educated at Queen's (BA 1858) and The University of Edinburgh, where he was ordained as a minister in 1861.

Shortly afterward, he made a surprising career change, becoming a mining chemist in Quebec. In 1875, he entered industrial life in the US. He discovered valuable copper deposits in Arizona, invented new metallurgical processes for the reduction of copper, and reached the presidency of three major mining companies.

Douglas also founded a huge smelting centre in Douglas, Arizona, which was named in his honour. Throughout his career he retained a deep interest in and affection for both Canada and Queen's. He wrote several works of Canadian history and donated close to $1 million to various University causes.

In 1910, Douglas established the Douglas Chair in Canadian and Colonial History. It was the first Chair in Canadian History in Canada, and in an unusual step, he had an actual chair made to accompany his gift. The chair was made out of teak, and was handcarved with Canadian symbols.

Douglas' biggest gift was to provide half of the funds for Douglas Library, which was completed in 1924 and named in his honour. He was elected Chancellor in 1915 after the death of Sir Sandford Fleming and served until his own death in 1918.