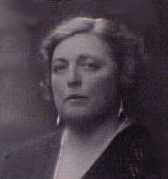 Agnes Etherington is one of the most influential figures in Queen's cultural history. She played a leading role in the establishment of the university’s fine art program in the 1930s and had even earlier purchased a collection of Inuit and Native art for Queen’s.

Her grand red-brick home on University Avenue was a gathering place for area artists and upon her death in 1954, she willed it to Queen’s to be used as a community art centre. The Agnes Etherington Art Centre has since grown into a highly respected gallery.

Etherington was connected with many important figures in Queen's history. She was the sister of James Richardson, who served as Chancellor between 1929 and 1939, and also of George Taylor Richardson, to whose memory Richardson Stadium is dedicated. She was married to Dean of Medicine Frederick Etherington. Her niece, Agnes McCausland Benidickson, was the 10th chancellor of Queen's.

Etherington is buried in the Cataraqui Cemetery.