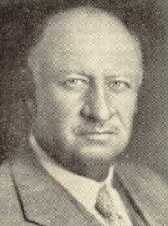 Born in Gananoque, Ontario, Frederick Etherington was a Queen's medical student from 1898-1902, but the list of his achievements as a student make one doubt that he was only here for four years.

Etherington made a reputation for himself as a great athlete, serving as captain of the football team, as well as a key player on the lacrosse and baseball teams. He was vice-president of the Alma Mater Society when it launched its campaign to raise the funds to build Grant Hall. He was also the valedictorian for his class.

In 1904, he went to the University of Edinburgh's anatomy department to learn about the well-known school's teaching methods, and he returned to Queen's as a lecturer in 1905.

In 1907, Etherington was appointed as a professor of anatomy - the first one in Canada.

In 1911, he traveled to Paris, London, and Edinburgh to study surgery and returned at the end of the year to open a practice in surgery in Kingston. Etherington was the first full-time surgeon in the city.

Etherington was very active in prison reform, and was appointed to the three-man Royal Commission established to look into the matter. That Commission made many recommendations on how the living conditions of prisoners should be improved and the work of the commission is considered to be one the most important steps in Canadian prison reform.

During WWI, he organized and commanded the No. 5 Stationary Hospital in Egypt, which was staffed by recruits from Queen's faculty and students. In 1916, the hospital was transferred to France and became the 7th Canadian Hospital.

In 1923, Etherington was appointed associate professor of surgery. In 1929, he was given a five-year position as Dean of Medicine, which was renewed in 1934 with no time frame attached. He remained in the position until he retired in 1943, at which time he was awarded an honorary LLD from Queen's.

Etherington was well recognized in the professional community as at Queen's. At various points during his career, he served as president of the Ontario College of Physicians and Surgeons and of the Medical Council of Canada.

Etherington Hall is named in his honour.