Film and Media Studies, Department of 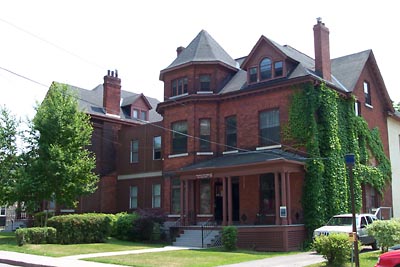 Film Studies at Queen's began in the 1960s when George Whalley, head of the Department of English, saw a need to give academic attention to the important place that cinema had come to take in modern life. He appointed the Canadian film critic and scholar Peter Harcourt to teach film classes in the English Department.

A separate Department of Film Studies was established in 1969, and by the mid-1970s it offered students a BA (Honours) program in Film.

The department combines historical and critical studies with production courses in film, video, and multimedia on the premise that graduates should be versed in both the contexts and the techniques of the art.

Since its founding in 1969, the Department of Film and Media has lived in the house at 154 Stuart Street, previously known as Film House. An acute need for additional space was answered in 1980 with the purchase of the house next door at 160 Stuart Street. In 1990, to accommodate the growing enrolment the two Victorian houses were joined with a central addition. The two converted Victorian houses at 160 Stuart Street now hold much of the Department's classrooms, offices, screening rooms, and workshops and production facilities, but students also use facilities in Ontario Hall and in Etherington Hall's auditorium.

The department maintains a growing archive of films, videos, and DVDs that includes significant collections of work by Canadian filmmakers such as Michael Snow, Allan King, and Atom Egoyan.

Learn more about the Department of Film and Media Studies...