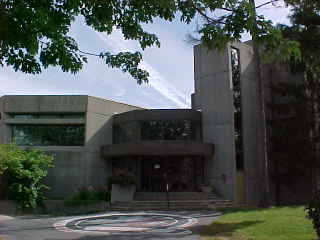 The home of Queen's School of Music, Harrison-LeCaine Hall is named after the eminent British musicologist Frank Harrison, the first resident musician at Queen's (1935-1946), and after Queen's graduate, scientist, and composer, Hugh LeCaine, a major figure in the development of electronic music in Canada.

Completed in 1973 (and said to resemble a grand piano from the air), the building houses classrooms, teaching and practice studios, rehearsal halls, staff offices, electronic and computer music studios, an electronic piano laboratory, and a lounge area.

It also used to house the music library, which has been moved to Douglas Library as part of the W. D. Jordan Special Collections and Music Library.

The building underwent significant restorations and renovations in the late 1990s and was re-opened in the summer of 2000. The funds for the construction of the building were a gift from the provincial government.

It is located on Bader Lane.