As a young man, Harty attended Kingston Collegiate and then Loyola College of Collège Ste-Marie in Montreal. He developed a love of hockey while playing for the Loyola team in Montreal, something that would stay with him the rest of his life. He returned to his hometown to study medicine at Queen's and with him he brought a faster version of hockey that he had learned to play in Montreal.

In 1896, he scored six goals to lead Queen's to a victory in the Ontario Hockey Association Championship against Stratford. The third verse of the Oil Thigh is now mostly unknown to students, but it urges them to "remember Captain Curtis and the Conquerors of Yale," referring to the 1897 victory over Yale in New York City. Jock Harty was part of that team.

After graduating from Queen's in 1897, Harty did a medical internship in New York. While he was there, he played for the New York Crescents. 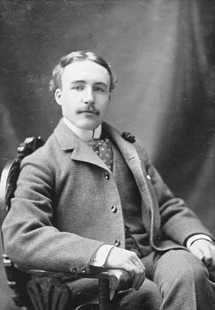 Eventually he returned to Kingston to take up a job with the Canadian Locomotive Company (CLC), of which he would become President.

Jock Harty maintained his link with Queen's and with hockey by coaching. He coached the CLC company team and the Queen's team as well, leading the Queen's team to a victory in the Allan Cup over Ottawa in 1909.

Sadly, Jock Harty died while on a business trip in England. He contracted the Spanish flu and died of septic pneumonia on February 23, 1919 at London's Savoy Hotel.

In his memory, the Jock Harty Arena was built in 1922, with the money for its construction being largely supplied by friends, family, and classmates.