History of Queen's: An Overview 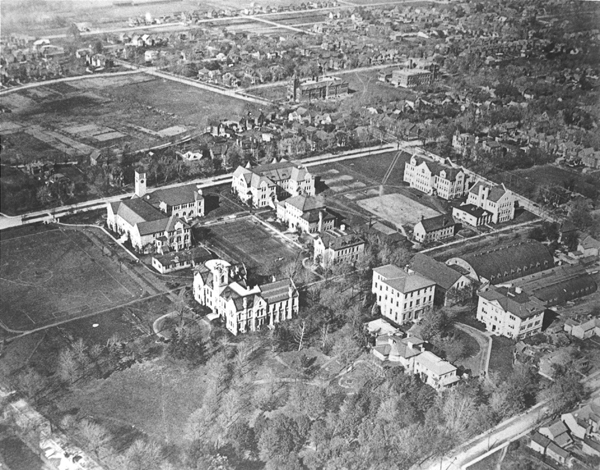 Queen's University was established on October 16, 1841 in a Royal Charter issued by Queen Victoria. The document was granted after years of effort by the Presbyterians of Upper Canada to found a college for the education of ministers in the growing colony, and to instruct youth in the "various branches in Science and Literature."

Its founders modelled the new college on the universities of Edinburgh and Glasgow, and like them, Queen's was given a governing structure built around a Board of Trustees, a Principal, and a Senate.

Classes began on March 7, 1842, when "Queen's College at Kingston" opened in a small wood-frame house on the edge of town with two professors and 13 students.

Queen's rise to prominence began slowly. For its first 11 years, the school had no home. It moved from house to house in Kingston, finally settling in Summerhill, a spacious limestone residence which still stands at the heart of the main campus.

Financial support came at first from the Presbyterian Church in Scotland, the Canadian government, and private citizens. But this support was meagre and barely kept the college afloat. In 1867 and 1868, the college faced ruin when the government withdrew its funding and the commercial bank collapsed, a disaster which cost Queen's two-thirds of its endowment.

Principal William Snodgrass and other dedicated officials narrowly rescued the college with a desperate fundraising campaign across Canada. Yet Queen's future remained insecure. As late as the mid-1880s, there was talk within university circles that Queen's should leave Kingston and merge with the University of Toronto in order to avoid financial failure.

However, Queen's senior officials were determined to stay and build on the roots the college had put down and the progress it had begun to achieve in Kingston. It had added the Faculty of Medicine in 1854 and took over the Kingston Observatory in 1861. In 1869, Queen's became the first university west of the Maritimes to admit women to classes and by the mid-1870s, enrollment had grown from 15 to more than 100 students.

However, it was not until the Principalship of the Rev George Monro Grant (1877-1902) that Queen's achieved a position as one of Canada's premier universities. The first of Queen's Canadian-born principals, Grant was an idealistic and forceful man, determined to build the college into a national institution. He was deeply religious and nationalistic and worked to produce graduates who would build the growing country in a spirit of dedicated service rather than material gain. Under his leadership, Queen's grew rapidly in size and prestige. By the end of his 25-year term, the college had more than tripled its size, gained a measure of financial security, and charted a course towards greater academic diversity.

In 1893, Queen's established the Ontario School of Mining and Agriculture, forerunner of today's Faculty of Engineering and Applied Science. A graduate studies program was launched in 1889. And in the 1880s, it pioneered correspondence education in North America.

Principal Grant died in 1902 and was succeeded by the Rev Daniel Miner Gordon, a fellow Nova Scotian. No one could replace Grant entirely, but the college continued to grow under Gordon's direction. The most important development in Gordon's term came in 1912, when Queen's separated from the Presbyterian Church - a move which brought it more in touch with an increasingly secular age. It was then that the college officially changed its name to "Queen's University at Kingston."

Gordon retired because of failing health in 1916, two years into World War I.

The war had a dramatic impact on Queen's. Students were thrown into military training. Grant Hall - an assembly and concert hall built in 1905 and named after the former Principal - was transformed into an army hospital. And the enlistment of students, staff, and faculty caused enrolment to plummet, leaving Queen's, according to university historian Frederick Gibson, a skeleton hovering on the edge of bankruptcy.

But the armistice in 1918 and a $1 million fundraising drive led by the new Principal, Rev Robert Bruce Taylor, soon put the University back on course of modest progress and innovation. Queen's introduced the first commerce courses in Canada in 1918.

The old Richardson Stadium was built on Union Street in 1920; Douglas Library went up in 1924; and Ban Righ Hall - Queen's oldest existing student residence - was built in 1925. The early 1920s were also the golden age of Queen's football. Queen's defeated the Edmonton Eskimos in 1922 for the Grey Cup and went on to win two more cups in 1923 and 1924, including one with the lopsided score of 55-0.

The onset of the Depression in 1929 brought progress at Queen's to a virtual halt, despite the notorious thrift of its administration. Sir William Hamilton Fyfe, Principal from 1930, built a slender base at Queen's for music and the fine arts, but could do little else to advance Queen's in the straitened circumstances of the decade. He handed the reins of the university to Principal Robert Wallace in 1936.

The Second World War followed hard on the heels of the Depression and thrust Queen's back into a world of military discipline and reduced expectations. Although the University did not suffer as it had in the previous war, it made few permanent advances - one notable exception being the establishment of the School of Nursing in 1941.

But the end of the war in 1945 ushered in the greatest period of growth in Queen's history. Between 1945 and Wallace's retirement in 1951, it opened the School of Physical and Health Education and a new building for Mechanical Engineering. After fire swept through the old Students' Memorial Union in 1947, the university built a new student centre, known today as the John Deutsch University Centre.

In the 1950s, the pace of growth quickened, propelled by the expanding postwar economy and the first stirrings of the demographic boom that peaked in the 1960s. During the Principalship of William Mackintosh (1951-1961), enrolment increased from just over 2000 students to more than 3000.

The university embarked on an ambitious building program, constructing five student residences in less than 10 years. In 1956, Agnes Etherington - widow of Frederick Etherington, a former Dean of Medicine - donated her large Georgian-style house on University Avenue to Queen's for the "furthering of art and music" at the university. Named in her honour, the Agnes Etherington Art Centre has since grown into one of Canada's leading art galleries.

Following the reorganization of legal education in Ontario in the mid-1950s, Queen's Faculty of Law opened in 1957 in the newly-built Law Building (at that time, called John A. Macdonald Hall). Other major additions to Queen's in the 1950s were the construction of Richardson Hall to house Queen's administrative offices and Dunning Hall, which housed the School of Business until September 2002.

The terms of Principals James Corry (1961-1968) and John Deutsch (1968-1974) saw continued growth. With baby boomers knocking at the door and public funding flowing generously, Queen's - like most other Canadian universities - more than tripled its enrolment and greatly expanded its faculty, staff, and facilities.

By the mid-1970s, the number of full-time students had reached 10,000. Among the new facilities were three more residences and separate buildings for the Departments of Mathematics, Physics, Biology, Psychology, and Computing and for the Social Sciences and the Humanities. The period also saw the establishment at Queen's of Schools of Music, Public Administration (now part of Policy Studies), Rehabilitation Therapy, and Urban and Regional Planning.

The biggest development was the establishment of the Faculty of Education in 1968 on land about a kilometre west of the University. This was the beginning of Queen's west campus, which also holds several residences and Queen's football stadium (Richardson Stadium), which had moved from the main campus in 1971.

Principal Deutsch put a brake on enrolment during his term (1968-1974) to safeguard the traditional personal character of education at Queen's. He believed that a full-time enrolment of about 10,000 would be large enough for Queen's to offer a wide range of programs while retaining its sense of community.

Since then, the appropriate balance has been found at a slightly higher enrolment, reaching about 13,000 full-time students in the 1990s. This decision to restrict growth, as well as a sharp reduction in public funding to universities, made the decade between 1974 and 1984, in the words of Principal Ronald Watts, one of "constraint, consolidation, and constructive change."

In 1978, work was finished on Botterell Hall, a nine-storey medical sciences and library building next to Kingston General Hospital. Several other buildings were expanded. And though the number of students levelled out, the number of applications soared, allowing Queen's to develop what are now the highest undergraduate admission standards in Canada. Queen's also worked successfully throughout the decade to improve graduate studies and research, increasing both the quantity and the quality of its graduate students.

Under the leadership of Principal David Smith (1984-1994), Queen's worked to maintain its high graduate and undergraduate standards. It sought as well to build on its roots as a place that welcomes students from all parts of Canadian society and from around the world.

As part of a small construction boom, the university built a new School of Policy Studies and a five-storey technology centre (Walter Light Hall). The most important project on campus in the early 1990s was the $48 million Stauffer Library at the corner of Union Street and University Avenue.

A dramatic development off campus was the donation of England's historic Herstmonceux Estate, complete with a 15th-century moated castle, to Queen's in 1993 by alumnus Alfred Bader. The estate serves as the Bader International Study Centre .

In September 1994, Principal Smith was succeeded by Dr. William Leggett, a former Vice-Principal at McGill University. Under Dr. Leggett's tenure, the construction boom continued, beginning with the construction of the BioSciences Complex, home to the Department of Biology, in 1996.

In 2000, the university completed renovations on the Agnes Etherington Arts Centre. From 1998 to 2000, Queen's Board of Trustees approved the construction of a number of new facilities on campus, including Chernoff Hall, home to the Department of Chemistry; Beamish-Munro Hall or the Integrated Learning Centre, home to a revamped Applied Science program; and the Cancer Research Institute, home of the National Cancer Institute's Clinical Trials Group (now known, as of Jan 2016, as the Canadian Cancer Trials Group).

The Board also approved a major renovation and expansion to the Victoria School, re-named Goodes Hall, home of the Queen's School of Business. Plans were also finalized for at least two new student residences, Watts Hall and Leggett Hall,on the lower campus.

Funding challenges in the late 1990s included drastic cuts in base funding from the provincial government, as well as the deregulation of tuition in the professional programs of Law, Medicine, Commerce, and Applied Science. Targeted funding programs have become increasingly the norm in recent years, with curriculum and enrolments being influenced by such initiatives as as the Ontario government's engineering and computing-focused Access to Opportunities Program (ATOP). Infrastructure costs have been similarly targeted through such programs as the federally-funded Canada Foundation for Innovation and the provincial SuperBuild program.

The need for increased funding is also being addressed through the Office of Advancement's ongoing fundraising efforts, which support a vast range of priorities, from new facilities to faculty recruitment, student aid, and curriculum enhancements.